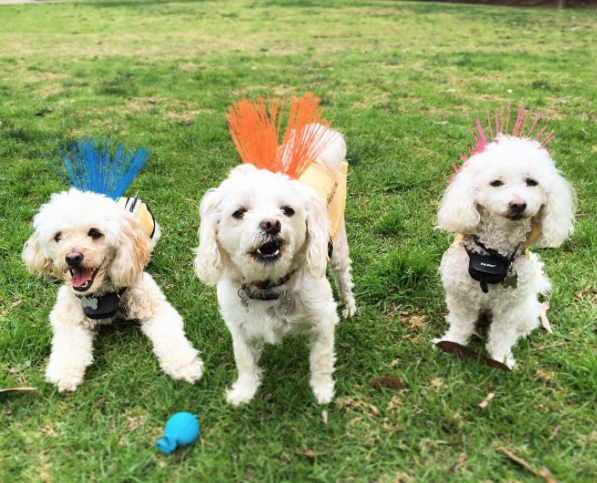 This rather insane looking dog vest serves a very serious purpose – to fend off a coyote! Coyote attacks on little dogs are very common in the USA, and it’s something Bichon Frise owner Paul Mott learned in a devastating fashion. In September 2014, his dog Buffy was taken.

“We never saw her again,” Paul says. “The coyote was too calculated, too stealthy, and too fast for us to stop it or save her.”

In his grief, Paul tried to think of ways to stop this happening to other dogs – and thought up the CoyoteVest!

With spikes around the collar, this Kevlar vest stops a coyote from grabbing the dog by the throat and launching a deadly ‘death shake’. The bright back spikes are an optional extra, if you want to go for a ‘poisonous caterpillar’ vibe. The company’s most popular version of the vest includes an electric current that zaps the attacking coyote, but doesn’t affect the dog. In full regalia, even the whitest, teeniest ball of fluff would be too intimidating for a coyote to attack anyway!

CoyoteVest is based in the state of California, where numerous celebrities have lost pets to coyote ambushes, including Kelly Osbourne, Miley Cyrus and Halle Berry. Singer Demi Lovato’s 7-month-old puppy Buddy was snatched in his own backyard in July last year.