With Crufts just around the corner, the RSCPA has announced the winners of its alternative dog show, ‘Ruffs’! In the charity’s third annual contest, thousands of members of the public voted and 15 finalists were taken down to three crowned champions. These dogs each have an incredible story to tell of overcoming adversity…

From a lonely start in life, Zara didn’t have all that much to be happy about at first. She spent a full 18 months in rescue, after being rejected and returned time and time again by potential families, who just couldn’t deal with her excitable, bouncy nature. Then Emma Hindson from Durham stepped in. She initially agreed JUST to foster Zara to work on her behaviour, but four years later the pair are still together.

“From the moment she sat herself on the settee, Zara was going nowhere,” said Emma. “We bonded instantly, and I just knew we were meant for each other.

“Life hasn’t been easy for Zara and I. Unfortunately, in January 2013, Zara was identified as a ‘pitbull’ type due to her appearance. Since then, she has been added to the Index of Exempted Dogs which means she lives a life of restrictions wearing her muzzle and staying on the lead whilst in public.

“We try to make things fun for her, by doing some agility, some scent work, and tricks but there is nothing she likes more than her freedom.

“Luckily I was in the fortunate position to get a private field to give her the freedom she desperately needs. This photo (above), for me, shows the pure happiness she experiences whilst having the freedom to do some ‘zoomies’ in the snow.” 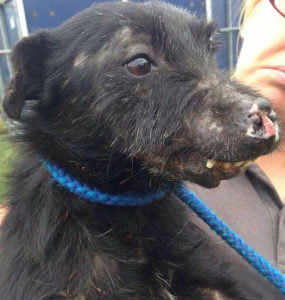 Sam’s face is the result of being used in badger baiting. This cruel and entirely illegal sport pits terriers against badgers in fights for human entertainment, leaving both sides with horrendous wounds. Sab was found with severe facial disfigurement, with chucks of his lips and nose missing. He also had extensive scarring on his chest, neck and genitals, and hardly had any teeth, despite being only around three years old.

Sab had being cruelly discarded by his first owners, apparently no longer of use in their evil games, and was found wandering in Burnley when he was picked up by Rossendale Responsible Animal Rescue.

Last summer, Sab was able to leave his horrific past behind for good; he found his forever home as a cherished pet and was adopted by Natalie Lawson and her husband Paddy.

“We needed to help him,” Natalie said. “Initially he was extremely nervous being around new dogs, but he soon settled in.

“He has since become inseparable from Paddy, he follows him everywhere ­and whenever he sits down, Sab is soon sat right on his lap. He even falls asleep snuggling him.

“Sab has been in our family for six months now, and we couldn’t imagine life without him.

“We’ll give him the second chance of happiness he deserves, and we’ll do whatever we can to help him forget his traumatic past.”

Staffie pup Buddy was found by Nicola Owst, after he had been abandoned in a cage on the outskirts of North London. He was left to sit in his own filth, and demodectic mange had ravaged his skin raw. At just 3 kilograms, Buddy was also terribly underweight. In short, he was a death’s door.

“I drove him 86 miles to my vets, constantly checking that he was alive along the way,” Nicola said. “The vet thought that Buddy had no chance of survival, but I wanted to try….

“After lots of love and care, and visits to the vets, my little boy pulled through.”

There was no question of Nicola keeping Buddy – they were meant to be together. Buddy is now eight years old, and unrecognisable from the pictures of him when he was first found.

“Buddy’s skin will never fully recover due to the severe neglect, but with a special diet, good flea treatment, and a special shampoo, it has improved hugely,” said Nicola. “He now also weighs a healthy 17kgs.”

“Buddy is my best friend. A lot of people say how lucky Buddy is that I found him but really, I think I am the lucky one.”

All photographs care of the RSPCA.