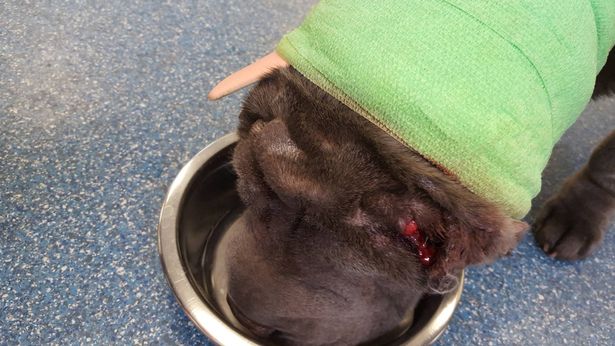 Boo, a five-year-old Shar Pei, was attacked with a machete on Saturday evening, when thieves broke into her home in Beswick. Boo’s devastated owner Maggie Burgess described the scene when she returned as a ‘bloodbath’.

She told the Manchester Evening News, “I saw her just stood between the blinds and the front window.

“She looked agitated and then I found the front door was open. She was dripping in blood. There was blood everywhere…

“I was just cuddling her and didn’t know what to do at first. My first thought was to ring a neighbour then I rang the police. They were brilliant.” 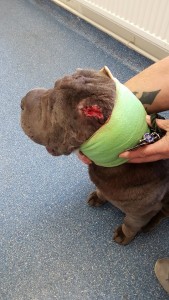 The police organised for pet medics, and have launched an investigation. The thieves had entered through the kitchen window and escaped with cash – but not before leaving Boo with wounds so deep her skull was visible.

Maggie added, “She is a brilliant dog and I think she has probably tried to defend her home. She does not bite, but she may have done on this occasion.

“They could have just opened the front door and she would have walked out. We just can’t believe it really, but the vets said that they do not think that it’s life-threatening.

“To come home to find your dog, a family member, beaten so badly must be one of the worst feelings ever, like a scene from a nightmare.”

Boo has injuries on her back, neck and head, and is currently awaiting major surgery.