Even from a young age we noticed Bailey was playing and biting his two front feet, at the time we did not see or feel anything was wrong with this behaviour .
A few months went by with this and suddenly out of the blue we noticed he had made a wound on his back left foot, so we started to treat it with various creams and ointments to try to clear Bailey’s wound up.
My girlfriend Paula posted a picture of Bailey on the working cocker page on Facebook and we had a reply from a lady called Elspeth Graham and she immediately said that looks like a case of A.M.S. and asked us what the symptoms were. We told Elspeth what we saw Bailey doing and she was convinced it was A.M.S. I contacted the breeder we had Bailey from to explain this and she was shocked to hear so she then put me in touch with the breeder she got her dog from. I called him and did not expect to be spoken to like I was, I was a bit shocked to be honest all I was explaining to the breeder was that this might be a case of A.M.S. and also said to him that this was a very rare condition in working cockers.

We went out one Saturday lunchtime for a couple of hours and came back to lots of blood in Baileys crate, what he had done was he had chewed right down to the bone on his foot and had taken out one of his claws we were horrified and immediately went to see the vet .We explained to the vet that we had been advised it may be a case of A.M.S. The vet we saw had not heard of this condition before, she thought it was Acral Lick Syndrome and put a bandage on Bailey’s foot and wanted to see him the following day (Sunday).

We arrived at the vet’s and her partner had turned up to see Bailey because he had heard of A.M.S. but never seen it. As soon as he saw Bailey going for his foot and seeing what he was doing to it he said, yes, its definitely A.M.S. he asked us did we know what the outcome would be and we said yes, there is no cure. Bailey was booked in the following day for a check up and to get his foot cleaned, by this time it was looking infected.

We were in constant contact with Elspeth about Bailey and the vets were as well. Elspeth’s friend worked at a university in Scotland where they had come across some cases of A.M.S at that this stage we were so worried that it might be A.M.S we then ordered a D.N.A kit from the French labortory Antegene this was a anxious 3 week wait for the result.

Bailey was put on antibiotics to cut out any infection and was put on Gabapentin for the condition and everything we put on his foot like bandages he would just rip off trying to get to his foot. We went through so many bandages trying to help keep the wound clean even a cone was no good as Bailey would find some way of getting to his foot.

During this time we all thought that with Bailey acting the way he was it may have been boredom and separation issues then we had the D.N.A. result back and it was confirmed that it was A.M.S. The result said that Bailey will have a 95% risk of developing the A.M.S. syndrome we were all devastated and knew we had a very difficult decision to make.

The symptoms Bailey was experiencing, was a constant pins and needles type feeling in his foot and this is the reason why he kept on biting and chewing his foot. The symptoms of A.M.S. was this type of feeling and some say there is no pain with A.M.S. but come the end of Baileys short life we are certain he was in some pain as on the day he got put to sleep he would not put his foot on the floor he was holding it up that’s when we knew it was time to let him go.

He was most happiest when we took him for his daily walk and to see him so happy running around with his condition and to see his foot how bad it was you would think he was in pain there was no signs of any limping nothing to show he had A.M.S.

This story is a guest submission. You can send in your story too, just click here 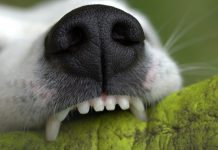