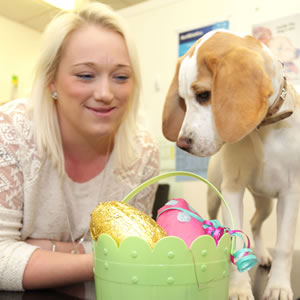 A delicious treat to humans, chocolate is highly toxic to dogs – shame that they don’t know it, and will happily gobble it down. Easter is an especially dangerous time; with chocolate eggs  everywhere,  disaster might be just one bite away.

Justine Parsons was aware of the danger, and thought she was keeping all chocolate safely out of the reach of Jessie, her seven-month-old Beagle puppy. However, it seems she underestimated Jessie’s determination; the pup managed to open the door to Justine’s daughter’s bedroom, climb on the desk and eat three milk chocolate eggs – foil wrappings and all!

Luckily, Jessie was rushed to the nearest PDSA clinic as soon as her owner noticed she was quiet, and found the remains of the egg wrappings.

PDSA Vet Nurse Rachel Beedle says, “Chocolate is poisonous to dogs as it contains a chemical called theobromine, which can cause kidney failure. Although milk chocolate has lower levels of theobromine than dark chocolate, Jessie had eaten a large amount; which could have proved fatal.”

Thankfully, the nosy pup made a full recovery after receiving prompt treatment.

“When I arrived to collect her, I couldn’t believe how quickly Jessie had recovered – she was bouncing about and making friends with all the receptionists!” Justine says. She has pledged that, from now on, any chocolate in the house will be kept in high, locked cupboards. 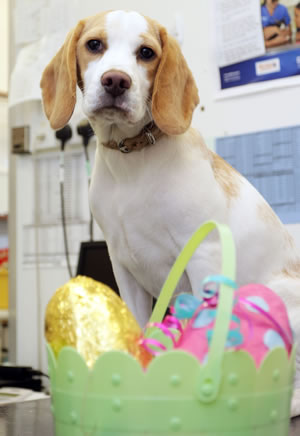 However, not all cases like this have a happy ending. According to a PDSA Animal Wellbeing report, over 450,000 dogs are being fed chocolate by their owners.

Vicki Larkham-Jones, a PDSA vet, says, “At Easter and Christmas our vets are on standby for a rise in cases of chocolate poisoning, which in some cases can be very serious and sometimes even fatal. Most pet owners love giving their pet a treat but some are still unaware of the dangers of human chocolate. Easter should be a time of celebration but making a simple mistake through a lack of awareness could actually mean the difference between life and death for your pet.”

The effects of chocolate poisoning in dogs usually appear within four hours of eating, and can last as long as 24 hours. Initial signs can include excessive thirst, vomiting, diarrhoea, a tender tummy and restlessness. Symptoms can progress to tremors, an abnormal heart rhythm, increased body temperature and rapid breathing. In severe cases dogs can experience fits, kidney failure or even death.

Vicki says, “Owners should store chocolates in the same way as medicines when they have pets in the house – safely and securely.”