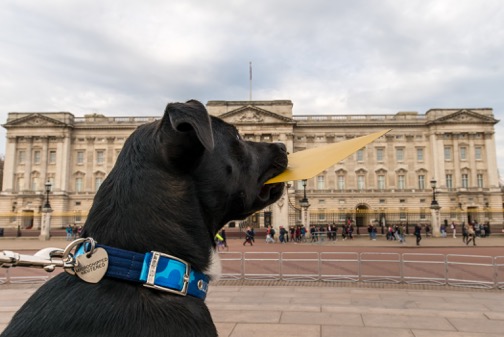 The animal charity unveiled its unique tribute to the animal-loving Queen yesterday. A menagerie of sounds were recorded by animals at Blue Cross rehoming centres across the country, including dogs, cats, guinea pigs, rabbits, horses and even chinchillas! The sounds were then remixed into the familiar song. One of the stars in the video is Fly the dog, who recently celebrated her 16th birthday – what could be seen as the equivalent of the Queen’s age in human years. Mary (pictured), a one-year-old Staffie cross Blue Cross dog visited Buckingham Palace with a birthday card ahead of the Queen’s 90th birthday.

Laura Boyle, Torbay Blue Cross rehoming centre Manager, says, “From corgis to horses, we know that the Queen loves being surrounded by animals, so we wanted to mark her 90th year by creating this version of Happy Birthday, featuring so many of our wonderful pets who are seeking new homes!”