American Bulldog pair Cilla and Shyla are a shocking 8st 8lbs (54.4kg) and 7st 13lbs (50.2kg) respectively, thanks to their owner regularly indulging them with carb-loaded treats, including crumpets, pasta and biscuits! But Cilla and Shyla are in it together – they need to lose almost 4st (24.6kg) collectively to get back to a healthy size.

This bowling ball of a Chihuahua is Tyty, who achieved his size by bullying the other dogs in his household and taking far more food than he needs, and even stealing sugary treats directly from his owners. This has led to him weighing almost a stone.

Tyty isn’t the only food theif in the competition; four-year-old English Bulldog Ethel is a snack-stealer, and her family admit to spoiling her with treats as well. Ethel’s weight ballooned last year after she tore her cruciate ligament and couldn’t exercise much. She now weighs in at 4st 13lbs (30.3kg) – making her 50% overweight.

Also involved in the competition are several fat cats and even an overweight rabbit named Pebbles, whose aversion to rain led him to spend many a lazy day indoors. Altogether the 13 contestants weigh a combined 46st 8lbs (296kg!) – but this lot are just the tip of the iceberg. Pet obesity is now endemic in the UK, with one third of all dogs classed as either overweight or obese. It’s a problem that is set to get worse too; a PDSA report into animal wellbeing found that four in five vet professionals believe overweight pets will actually outnumber healthy ones by 2019.

“Too many pets are being fed unsuitable diets and not receiving enough exercise. So it’s vital we educate owners on how to keep their pets fit and healthy before the problem gets even worse. If owners are unsure what to feed their pets, or are concerned about their weight, they should always seek advice from their vet.” 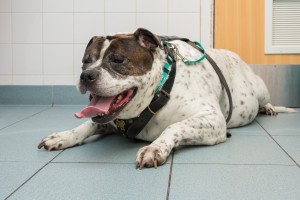 Nicola added, “With the help of PDSA Pet Fit Club, these pets and their owners will be making positive changes to their lifestyles to help them slim down to a healthy weight. PDSA will support them every step of the way over the next six months to ensure they succeed.”

We are looking forward to the ‘after’ pictures!