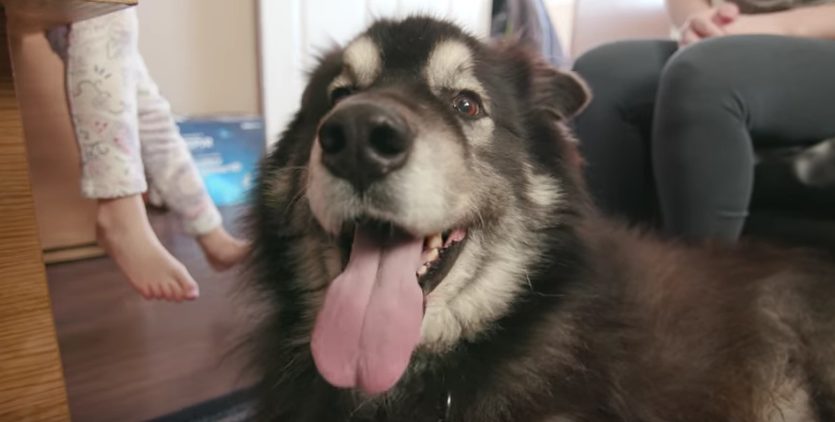 Alaskan Malamute/German Shephard cross Rex from Saskatchewan, Canada, has entered Purina’s Hall of Fame for saving his owner’s mother from a house fire on Christmas Eve.

Noreen Lucas had travelled to her son’s house to spend Christmas with him and his family, but came down with pneumonia on Christmas Eve. She therefore decided to stay home while the Hawman family – her son Mitch, his wife Santana and their three children – drove into Saskatoon for a holiday dinner with extended family. After taking a sleeping pill to better rest, Noreen fell asleep on the couch – a sleep so deep she was not roused when the house caught fire.

Rex began barking to alert her and, failing to wake her up, he dragged her off the couch and to the front door. That was when Noreen finally awoke, and was able to leave the house, which was soon engulfed by flames.

The Hawman family has absolutely no doubt that without Rex, whom they adopted from a local shelter as a puppy, Noreen would have died in the fire.

“I hope I never go through something like that again – in a matter of four hours, ten years of hard work is just gone,” Mitch said. “This story could have been a lot worse – it could have been that I lost my mum and my house. And on top of it, I have an amazing dog.”

As for Noreen, she promised Rex the biggest steak in the world – which he’ll probably enjoy even more than the medal he received!

Rex is a hero! Such a sweet 'ol guy rescued a family member from a burning house. Incredible! #ahof @PurinaCanada pic.twitter.com/sDl5Ns0ZjI

You can watch the full story here: