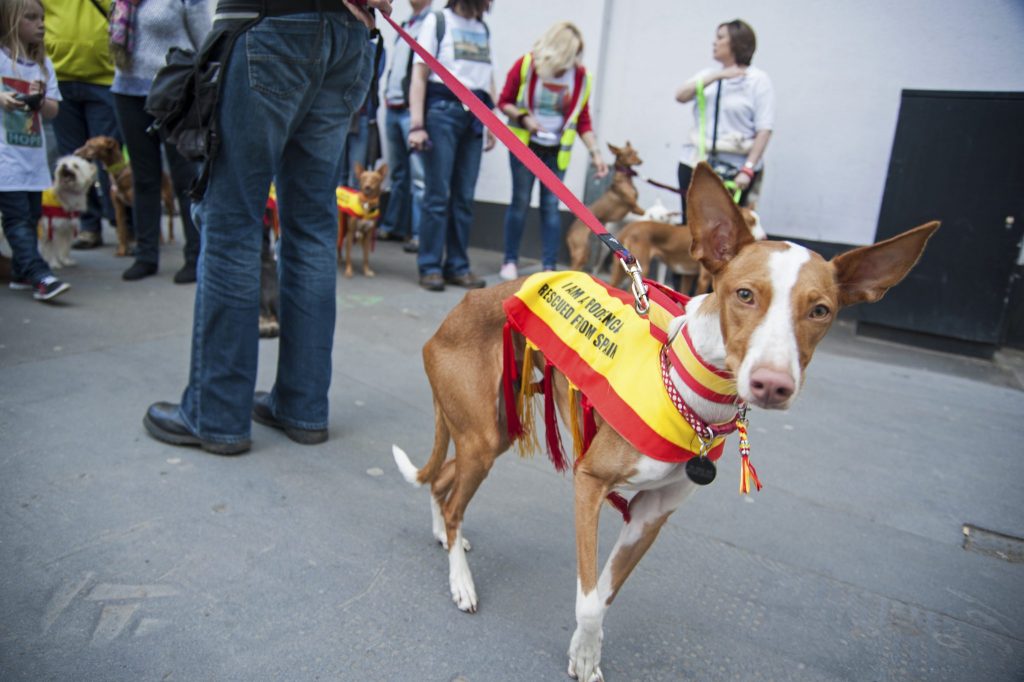 Abandonment, injury, disease, death – that’s the likely future of the tens of thousands of hunting dogs working in Spain. When the season ends, or they can no longer work, these dogs are tossed like rubbish in rural areas and left to fend for themselves, while another generation takes their place. It is an incredibly cruel cycle, and one that welfare groups working here in Britain and abroad are fighting to end.

On May 1 this year, a huge pack of Spanish ex-hunting dogs and their rescuers and owners took to the streets of London, to protest the inhumane treatment of these dogs outside the Spanish Embassy and 10 Downing Street. It was organised by Podenco Alliance and Podenco Support South West, and supported by numerous Spanish and international refuges, as well as a number of Spanish individuals – activists, film-makers, police officers and lawyers, each trying to turn the tide of animal cruelty in Spain.

The date marks the International Day of the Podenco, the most numerous breed to be found among those abandoned. These quirky little dogs are sadly known as ‘The Great Invisible’, as unlike the Setters, Pointers and Galgos (Spanish Greyhounds) that sadly also face a similar fate in Spain, Podencos are rarely seen outside their native country, and therefore don’t attract the same number of international allies.

One dog hoping to change this is Inca, the pin-up girl for the day. She is a Canarian Podenca (the female version of the Podenco) and was abandoned by her hunter after he had used her for breeding. At seven-years-old, Inca was fending for herself on the streets, now considered to be useless. Thankfully, Inca came into the care of Huella a Huella, an organisation dedicated to saving strays on Lanzarote, and she now lives in the UK with Angela Wilson and her family.

“Inca is my amazing princess,” says Angela. “The sweetest, most loving ‘pod’ ever. She sleeps on our bed and loves her sister Podenca named Pandora.

“She was used as a breeding machine; her teats just hang.

But for every lucky one who finds a new life abroad, there are many for which the end of the hunting season means the end of their lives too.

Andrea Johnson works as a veterinary nurse in Malaga, and is exhausted by the suffering she witnesses.

“As a vet nurse, a rescuer and foster home for Spanish dogs, primarily Podencos, I see the cast offs from the hunting ‘industry’ – the dogs who haven’t made the grade, the older dogs who can no longer breed and aren’t good enough to hunt anymore, the dogs carrying injuries that no one can be bothered to treat. At the end of the hunting season the perreras (pounds) are filled to overflowing with hunting dogs and the number of strays running loose noticeably increases. There seem to be greater numbers of ‘pods’, possibly because they are used by the career hunter and hobby hunter alike.

“The rural “campo” area I live in is a popular hunting area but also a dumping ground for dogs outside of the season. The hillside is alive with strays at the moment, most of them too scared to approach me, thin and frightened of people. I’ve witnessed several loose pods mating, testimony to the unwillingness of the hunters to neuter their dogs because they feel it affects their ability to hunt. More pups waiting to be born in the wild.

“It breaks my heart that podencos are supposedly so revered by the hunters (they are extremely proud of their ‘good hunting dogs’) and yet they are tossed away without a second thought when they are no longer needed – either dumped miles from home (pods have a very good homing instinct), signed into perreras with permission to euthanise, not even given the courtesy of a backward glance. These dogs are broken and thin, they often won’t look you in the eye and even when they have been shown love and a soft bed, regular meals and have rewarded you with a wagging tail and cuddles there is still a hint of their past, a raised voice or picking up the broom too quickly and they return to a quivering wreck, hiding under tables with their heads hidden!”

Andrea continues, “It is very sad that such noble, loyal creatures are treated so badly to make them do the hunters’ bidding when hunting is a natural instinct to most of them and starving and beating them is really not necessary! Not all hunters treat their dogs like this but I think it’s fair to say the majority do. Banning hunting with dogs in Spain is still a way off, sadly, but in the meantime education and better working relationships with hunters must be established in order to try and help these dogs. People like myself will continue to save the ones who are lucky enough to survive this life but we can only help so many. Without the co-operation of the hunters the number of dogs dying and abandoned will continue to rise and that is an unacceptable proposition.”

SOS Podenco Rescue is a Spanish charity that works to save Podencos. This breed has an undeserved bad reputation in Spain, as many Spaniards believe they are solely working animals and cannot be kept as pets. This means rescued Podencos are sent overseas, to owners who can see them for who they really are – loving, cuddly and fun dogs that thrive in a family environment. This is wonderful to witness in dogs who have been likely be chained, abused, over-bred and starved in their early years.

Singha was one such dog, a Podenco who ended up in a pound in Almeria with a death sentence looming ever closer. He had been discarded as he was a nervous boy, likely afraid of gun shots and an inefficient hunter. Thankfully, SOS Podenco Rescue found him a foster home in Scotland where he could begin to heal.

His fosterer, Claire Gillen, said, “When Singha came to me he was very scared, he wouldn’t come through doorways, jumped at every little noise, and if you went near him he cowered away from you, obviously expecting to be hit. He hid in his crate for the first few days, then found a spot on the dog bed next to my greyhounds and wouldn’t move from there. At first he wouldn’t come into the kitchen to eat, I had to take the food to him, but gradually over time he got closer and closer until he was eating with the others, but for a long time if I made a sound or moved while he was eating he would jump away from the food and not come back. It was awful to see.

“Gradually over time he got into our routine, he was at his most confident outdoors, so apart from pack walks, I took him on his own much longer walks, which he loved. When we moved house, he went back to hiding in his crate, but over time I enticed him back out, and he found his place on the sofa. He became very affectionate, and loved nothing more than snuggling right up to me on the sofa in the evenings, making little grumbly noises if I stopped patting him. He transformed into a lovely boy, but despite all the advertising there was no interest in him at all, and he was with me for over a year, until one day someone spotted a photo of him and got in touch. It was meant to be, I think he was waiting for her all the time. So off he went to live with Louise Buchan, and Ruby, her lurcher. A few months later they were joined by ‘mini pod’ Beto. Singha loves his Mummy, and his pack, and has a very happy life near Loch Lomond, Scotland.”

SOS Podenco Rescue has rescued over 200 dogs since its formation in September 2013, and is entirely reliant on donations for the veterinary treatment, rehabilitation and travel costs it has to cover. You can find out more about them here.

You can help to ease the Podencos’ plight by supporting any of the organisations mentioned in this piece, either through donating your time or money, or even by adopting one of these wonderful, good-natured dogs for yourself.