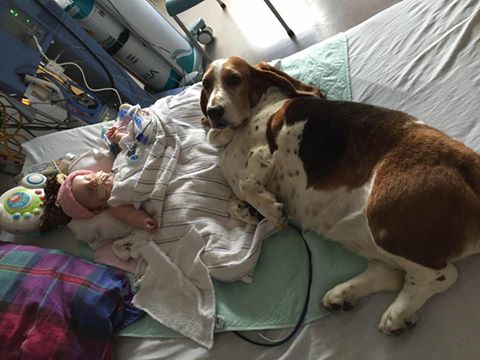 When baby Nora Hall had a major stroke in April, her parents were devastated. The five-month-old suffered severe brain damage, and was put in a medically-induced coma as a result. It was soon advised that her life-support was turned off. In her final days, the family’s Basset Hounds were allowed to visit Nora, as they were becoming ‘stressed and sad’ from being apart.

Nora’s mother Mary Hall wrote on Facebook, “My daughter had a stroke on April 6. We have been at Children’s Hospital in Minneapolis since then. She is not going to survive.

“They allowed us to have our bassets here in the last couple of days because they are so attached to her.”

Mary also said how much the nurses loved having the dogs around.

On May 4, Mary posted this message: “Yesterday at around 3:45pm, our sweet baby Nora sighed a little sigh and breathed the breath that was her last. She died with her puppies at her feet and while being held close in the arms of her parents as they sang to her and caressed her and told her how very much they loved her.”