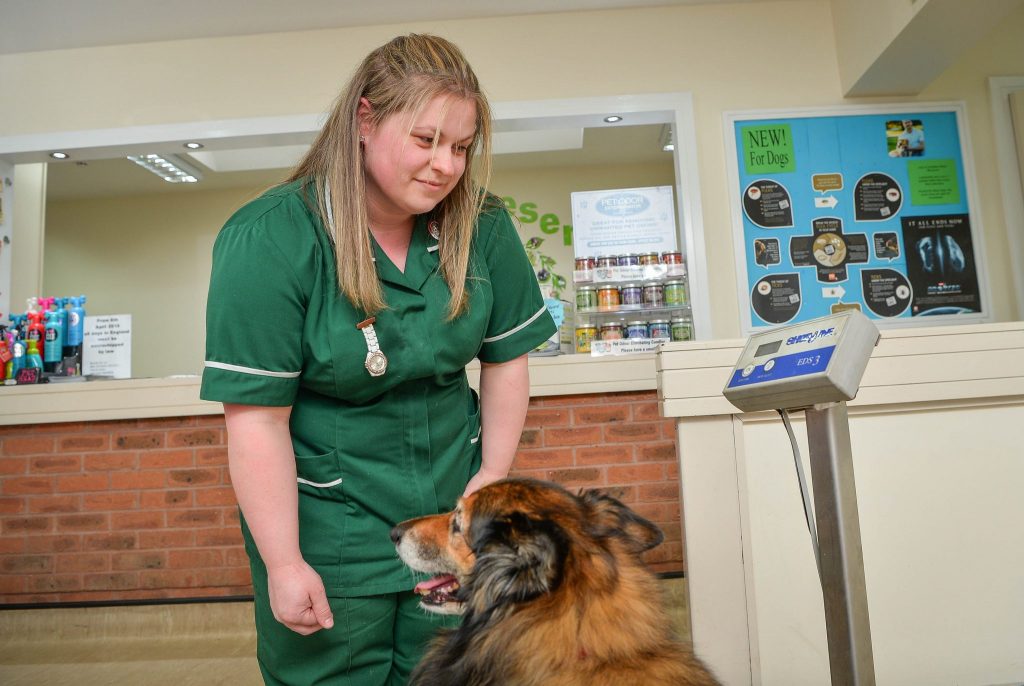 A campaign, that launched at the end of last year, is helping obese dogs in Cheshire battle the bulge. Abbeycroft Veterinary Surgery in Northwich has set up the county’s first weight management centre.

Pet obesity has big become a big problem and it’s now estimated that more than half of dogs and cats are overweight. Just like humans, obesity in animals is linked to a shorter lifespan and a variety of health problems including diabetes, arthritis, and heart and respiratory diseases.

Around 60 pets, mainly dogs, have now embarked on their own tailor-made, weight watching journey with Abbeycroft’s head nurse Katie Hartnoll. For a start-up fee of £20, the four-legged patients will have regular visits to Katie to be assessed and weighed, while their owners received advice on exercise and nutrition. Dogs will be given a starting body condition score between one and nine, with a score of seven or more rated as obese.

The scheme, which is sponsored by Royal Canin pet food manufacturers, has already seen success with 11 registered pet reaching their target weight, with a body condition score of four or five. Pets who make it to their target weight are rewarded with a rosette and certificate.

Katie, who specialises in animal nutrition and oversaw the surgery’s approval as a pet weight management centre, said, “We are definitely seeing very overweight pets more and more and in most cases, it is nothing to do with owners not loving or caring for their animals. Often the reverse is true.

“It’s the relationship which owners have with their pets. They feel they are not providing enough love if they don’t reward them all the time with treats. One owner told me she was feeding her dog Viennese whirls every day and this seemed a loving thing to do because the dog clearly enjoyed it.

“It’s a common problem that owners spoil their much-loved pets with human food. They’ll have a Sunday roast at the same time as the rest of the family and owners will want them to have the same sort of variety in their diet as we do. But it’s simply not necessary and in fact, most animals actually thrive much better with regularity in their diet. They don’t need all the choice and they don’t look forward to a Sunday dinner like we do.”

Staff at Abbeycroft underwent an intensive three months of advanced training and assessment in pet body condition scoring and nutrition.

Katie said, “What we try to do is work with the owners to find a suitable new regime which helps the pet to lose weight and keep it off. This can involve a combination of exercise and diet but sometimes this might not always be possible. For example, it might be an elderly owner who can’t up the exercise and in that case, we can work very closely with them to change the diet to help improve things.

“The main thing is that we don’t want people to feel embarrassed or feel that they have failed if they have to come and see us. It can be challenging to manage a pet’s weight but we are here to help every step of the way and the rewards for us all are a much happier, healthier pet with an improved quality of life.”

Housemates Sebastian, a nine-year-old Jack Russell, and Moffi, an 11-year-old Belgian Shepherd cross have both reached their target weights. On their first visit to Katie they each received a score of eight and were classed as obese. Since then Sebastian has shed more than two kilos and Moffi has lost almost five.

Their owner Jacqueline Nicholson said, “The difference in them is wonderful. They are both more active, which is important as they move into the later part of their lives. Their coats are really, really good and their toilet stops are noticeably improved which makes keeping the garden cleaner a lot easier, especially now my grandson Austin is moving around.

“I have also noticed that Moffi just seems a much happier dog. She looks full of life and I think her weight was getting her down. She obviously just feels so much better and it is lovely to see.

“Katie is lovely and has been a terrific support with it all. She keeps you on the ball but she doesn’t talk down to you. You feel like she is on your side and I don’t think any of us would have been anywhere near as motivated without her encouragement.

“We are still working with her now to ensure the weight stays off.”