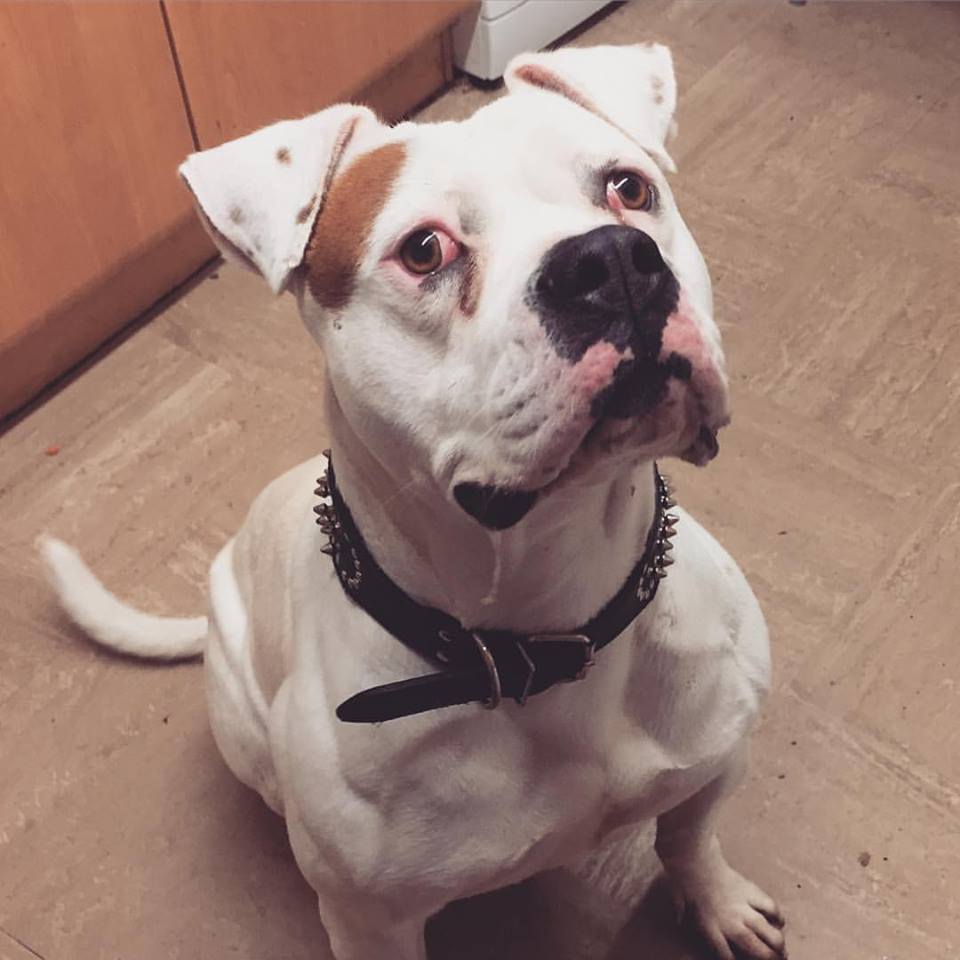 I have a 4 year old American Bulldog called Winter who I love taking for long walks. I often take her on the bus or the train to take her to different places. One hot day, we decided to take her to town to a nice air conditioned pet shop to get her something nice. When we got on the bus, it was absolutely sweltering. Not even me and my nan could cope with the heat, let alone Winter. She started panting heavily. I couldn’t wait to get off the bus. As soon as we got off the bus, we went straight to the shop to get Winter a cold bottle of water to help her cool down. While waiting for the water, she vigorously vomited. She still managed to drink the whole bottle of water but she was still heavily panting and threw all the water back up. We decided it was best to take her back home and put her in a cool place. However, on the way back to the bus station, she collapsed at a bus stop and went completely limp. She was no longer panting but gasping for air. She could not breathe and her tongue was turning blue. A woman came along and told us there was a vets round the corner so my nan had to rush there to get a vet out to get her. We couldn’t get her there because she’s a 6 stone American bulldog, there was no way we could carry her. My nan was taking a long time at the vets and there was no more time. If we waited any longer, Winter would die. Luckily, there were a couple of men who offered to help to carry her to the vets. When we arrived, the vet nurses took her straight through the back to work on her. They wouldn’t let us go with them. There were roughly 6 nurses working on her as her condition was very serious. She suffered significantly with a heat stroke. The doctor came out and told us that her temperature is 44 degrees and that she is worried that she won’t survive as at that temperature, her organs can fry up and fail. I was heartbroken. What was meant to be a beautiful day turned into a complete disaster.

I blamed myself for her dying. They let us through to say our goodbyes just in case she wouldn’t make it. She was covered in cold damp towels and ice packs. She was on 2 drips of fluids and also on oxygen. When I arrived in the room, to the nurse’s amazement, she lifted up her head. I took the oxygen off the nurse and held it for a little while for Winter as I felt completely helpless. Her breathing improved and they managed to drop her temperature down to 41 degrees. There was a chance she would pull through. We said our goodbyes to leave the nurses to it. They told us the doctor would call around 8 o’clock but we could phone them at any time to check how she was doing.

At home, I was restless and worried that I would receive a phone call to say she didn’t make it but no news was good news. 8 o’clock came round and there was no phone call so I phoned them. The receptionist told me that she was settled and sleeping. I thought that was a good sign as maybe she could sleep her illness off. We eventually received a phone call at 10 o’clock from the doctor. He told us that her temperature is back to normal and she is conscious but not responding. She can see things but it’s like she cannot process what she was seeing. They were poking her eyes but she was not blinking. He said there might be a chance that she has brain damage. He also said although she is fine regarding her temperature, it is still early days as in the next 48 hours, her organs could fail and she may not make it. I was utterly devastated. I didn’t sleep that night as I was expecting a phone call to say she died. Luckily, she made it through the night and the next morning, she had to be transferred to PDSA hospital in Wolverhampton. I was talking to the nurse and doctor and they told me that it was a complete miracle that she managed to survive through her temperature being 44 degrees. He told me that Winter was only the second case he has seen where the temperature has been that high and the first dog did not make it. It was a miracle Winter did survive but she was still not out of danger. They were also shocked that 2 hours after being limp and not being able to breathe, she stood up and she was that active, they had to give her a drug to calm her down. When I saw her that morning, she was a completely different dog. She was walking, she saw me and she recognised her name.

When we arrived at PDSA, they checked her heart which was fine and her temperature was also fine. She was overall OK. They said they will send her through to give her more fluids and if all goes well, she can come home the same day. My spirits started to lift, maybe she will be OK after all. They told us to phone them at 2 o’clock and they will tell us what is happening so at 2 o’clock I phoned them, however, the news wasn’t good. She had been sick and deteriorated a little which meant she would have to be transferred to Oldbury PDSA to stay over the night for observations and possibly more treatment. On our way to pick her up to transfer her, we had a devastating phone call from the vets. Winter had deteriorated badly and had fallen unconscious. They said she most likely won’t pull through. They tried everything they could to wake her up but she wouldn’t wake up. They opened her eyes but they were not responding. They told us to come up and say our goodbyes. That bus ride to the vet was the bus ride from hell. My baby was going to die and we were on our way to say goodbye. When we arrived, the vet told us that it wasn’t fair to leave her in that state and the best thing to do was to put her to sleep. I never cried so much in all my life. My heart shattered into a million pieces.

When we went through to see her, she was just lying there on her side as if she was fast asleep. I collapsed on the floor next to her, held her and called her name. Suddenly, to everyone’s surprise, she woke up, stood up and started sniffing my face. She also had a drink of water. All the nurses at the vets could not believe what they were seeing. They even called the doctor to show him what had happened. They tried everything to wake her up and it was a complete miracle that I managed to wake her up. It just shows how strong the bond is between me and Winter. Although she was awake now, there was still a high chance that she could fall unconscious again through the night and not pull through but because she was awake, she was able to be transferred to Oldbury. When we arrived in Oldbury, they checked her heart and temperature which was all fine and he told us that there is a 50% chance that she will survive the night. They would have to give her a blood test to see how her organs were doing. We said our goodbyes just in case she wouldn’t make it through the night. I did not want to let her go but she needed her fluids so we went home. When I got home, I was so mentally exhausted, I could barely stand and keep my eyes open so I went to bed. I didn’t even bother to get dressed. I was only asleep for an hour when my nan woke me up to tell me she had a phone call from the doctor at the vets. ‘Oh no’ I thought. ‘That’s it, she’s gone. My baby is gone forever’. But far from it. The blood test results came back and it shown that all her organs were perfect and she was ready to come home that night. She was no longer in danger. She hasn’t got brain damage and her organs did not fail despite her dangerous temperature of 44 degrees. Everyone was shocked. Winter was our miracle dog. She fought against all odds and made it through. She had won the battle with heatstroke. As I am writing this, she is sitting next to me giving me puppy eyes because she wants to play. I decided to tell my story as a warning to other dog owners. Do not take your dog out in the middle of the day when the hot weather is at its peak. I do not want other dog owners suffering what we had to suffer. Although Winter survived, other dogs may not be so lucky so be careful when the weather is hot. When you are hot, the dog is a lot hotter than you because of their fur coat. Winter is now a happy, recovered dog.