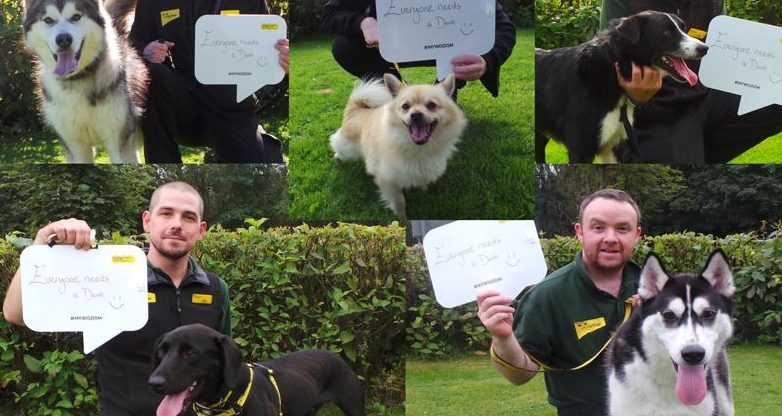 ‘David’ seems to be a popular name in Glasgow, as no less than five staff members at the Dogs Trust Glasgow share it: Dave Fyfe, Dave Martin, Dave McNaught, Dave McIntyre and Dave McNeil.

Sandra Lawton, Dogs Trust Glasgow Rehoming Centre Manager, said, “We have so many Davids based at the Rehoming Centre; we had to nickname them all in order to immediately identify who each one is.”

Now, to make things easier, each David had a dog at the centre named after him – for a total of 10 Daves.

Says Sandra, “Each dog has been named after the Dave it is most like, whether this is because they have a lot to say for themself, are cuddly, full of energy or can always be found in a playful mood.”

“I’d love to see all our Daves find special families because all anyone needs in life is a Dave,” Sandra said.

They may not need to wait for long: not only are they all loveable boys, but Dogs Trust has seen a rise in the number of people calling to rehome one of the dogs in their care.

Lucie Clayton, Contact Centre Deputy Manager, said, “It’s fantastic that we’ve had almost 14,000 more calls in the last year than in the previous twelve months from people hoping to rehome a specific dog from us. In addition, we saw a 14 per cent increase, almost 19,000 calls, from people who wanted to know a little bit more about adopting a dog before they went along to one of our centres.”