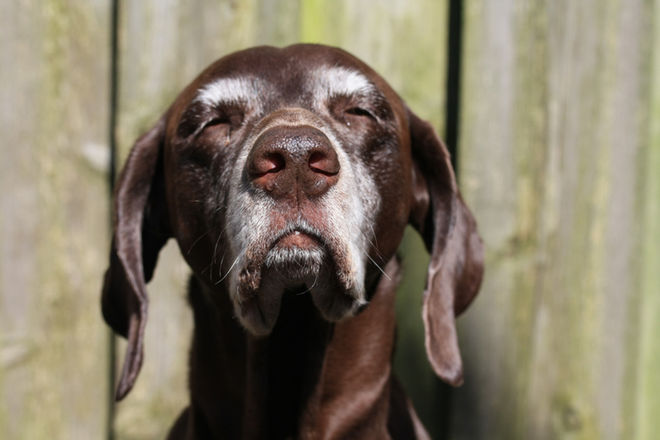 An innovative study, conducted by lead researcher and animal behaviourist Camille King, has discovered a new-found link between anxiety and the development of grey fur around the muzzle. According to research completed by Northern Illinois and Colorado State Universities, dogs whose owners rated their pets as anxious or impulsive, were more likely to develop premature grey muzzles.

To carry out the investigation, questionnaires were handed out to the owners of 400 dogs, each containing 42 questions relating to their dog’s behaviour, age and health plus an accompanying mug shot of their four-legged friends. Dogs, either between the ages of 1-4 years or those with primarily lightly coloured fur were excluded from the investigation to avoid aging complications.

In order to gauge each dogs level of anxiety, researchers asked questions directly referring to their pet’s behaviour; including whether it being left alone led to the destruction of household objects, if hair-loss was suffered during veterinary examinations and if their dog reacted to large groups of people by cowering or recoiling from the situation. Impulsivity was then measured by whether dogs jumped up at people, if they suffered a loss of focus or remained hyperactive after exercise. The information was then collected before two independent judges, unaware of the dogs in question, rated each dogs fur on a scale of 0-3 in terms of its greyness.

The results were immediately significant, as expressed by King who stated:

“At first, I was somewhat sceptical of the hypothesis…however when we reanalysed the data, the results were actually quite striking”

The information collated indicated that female dogs tended to have higher levels of greyness than male dogs, with dogs that showed apprehension toward loud noises or unfamiliar animals or people also tended to have an increased level of greyness. However, it was determined that greyness had no connection with the size of canine in question.

What’s most important about these findings is how the research gathered can be applied in a practical sense, as co-researcher and professor of animal science, Temple Grandin stated:

“This is an original, unique study that has implications for dog welfare”.

Now, owners who notice a prematurity in the greyness of the fur around the muzzle area, can respond to this by enrolling their dogs in specific behaviour modification programmes, thus relieving their pups of psychological issues that can have a damning long term effects.