One man and his dog are spreading the message about keeping Britain tidy, whilst raising money for the Northern Inuit Society.

Wayne Dixon is one of Keep Britain Tidy’s litter heroes and, accompanied by Northern Inuit Koda, is on a mission to walk the entire coastline of Britain, collecting litter along the way. The pair are also raising the issue with people they meet en route with litter-picking events. Walking in memory of his father, Wayne set off on his epic journey almost a year ago (1 February 2016) from Knott-End-on-Sea in Lancashire, with only Koda for company and a full rucksack of supplies.

This week they visited Keep Britain Tidy’s Eco-Schools’ Barlows Primary School and LIPA Primary School, in Liverpool, to speak with the schools’ Eco-Committees, a group of students with a particular interest in the environment, about the importance of keeping Britain tidy. Students also took part in litter-picking in the playground and Wayne talked to all the schools’ children about litter and the dangers it presents to wildlife and the marine environment.

Wayne Dixon says, “It’s been a great stop in Liverpool, it was amazing to see how interested the students from Barlows Primary and LIPA Primary are in litter and its effects on the environment. The Great British Spring Clean is the perfect opportunity for people to get involved and help out their local community.”

Keep Britain Tidy Chief Executive, Allison Ogden-Newton, says, “It was great to have Wayne and Koda visit Barlows Primary and LIPA Primary this week, and to see how enthusiastic the children are about keeping our environment clean. Here’s to the next generation of litter-pickers!”

Next week they will be hosting two events on Merseyside beaches – Wirral Beach and Formby beach – and, as ambassadors of the Great British Spring Clean campaign, they are also encouraging people to get involved in a clean-up over the weekend of 3rd to 5th March. Find out more on the Keep Britain Tidy website. To donate, go to Wayne’s gofundme page. 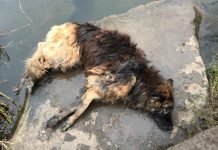 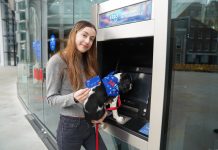