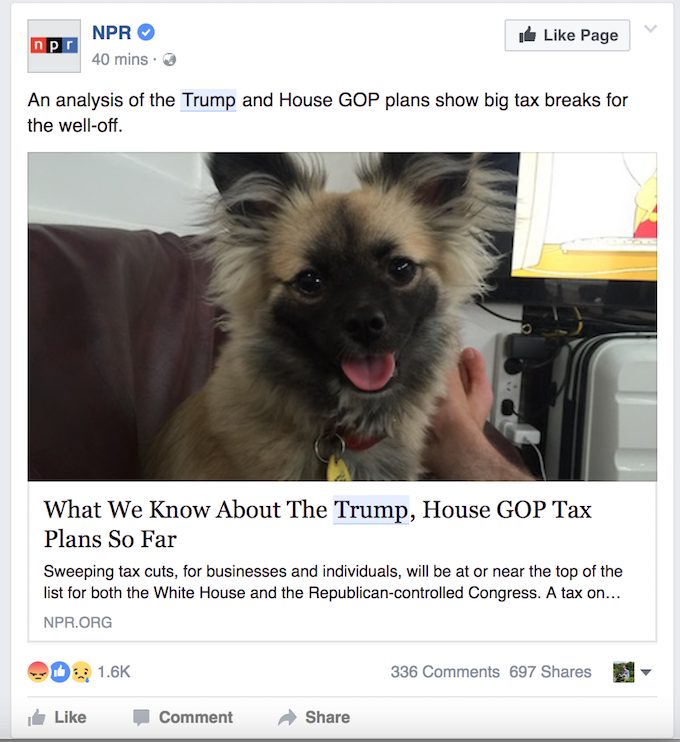 With politics everywhere you look, some people are getting a little tired of it.

If you’re one of them, dog owner Anthony Gardiner has come up with an ingenious solution to your problem. He’s created a chrome extension that replaces photos from news articles about US President Donald Trump shared on your Facebook newsfeed, to a photo of his Chihuahua cross, Cashew.

On Reddit, Anthony posted, “If you prefer dogs to politics, this extension will stop photos of Donald trump being posted into your Facebook timeline. You will still get the article links and the text, but the photo will be replaced with one of Cashew, a Pomeranian x Papillon x Tibetan Spaniel.”

Commenting on his creation, Anthony said, “The issue we are solving is that Facebook should be about friends. An unfortunate number of articles about Donald Trump end up in my news feed though. This service replaces all the photos of Donald Trump that accompany those Facebook articles with a random photo of my dog, Cashew. I considered making it for the whole internet (and may extend it to do so at some stage) but for now I decided that if a user goes to a news website, they should expect to see Trump. Facebook should be a Trump-free zone though.”

Uploaded two days ago, users are already leaving positive reviews with one person commenting, “Cashew is what the world needs right now. Recommend.”

The extension is available for 59p from the chrome web store.