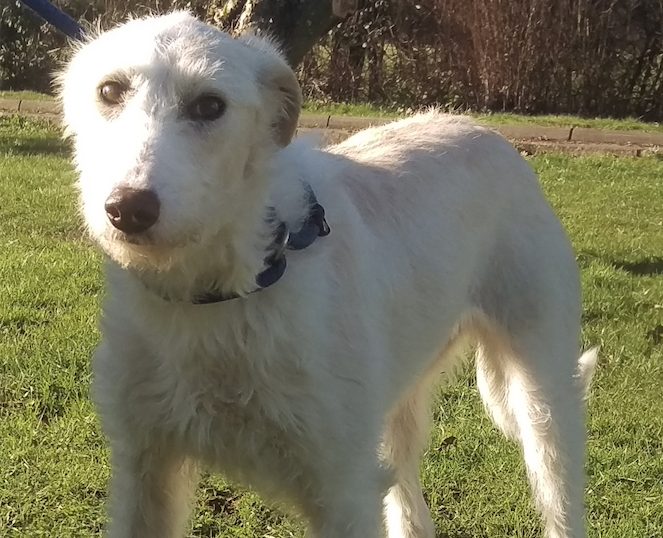 The RSPCA is appealing for information after an injured Lurcher was discovered on a busy main road in Braintree, Essex. CCTV footage revealed the dog had been taken out of a white van by two men and dumped on Queens Road at 11am on Tuesday 28 February.

The two-year-old Lurcher is then seen running around on the pavement and in the road for several minutes. One of the men reappears and hands a collar and lead to a passer-by, claiming the dog belonged to someone else. The passer-by called the RSPCA who have taken the dog – now named Poppy – into their care.

RSPCA inspector Caroline Richardson said, “The incident is particularly shocking as these men have dumped Poppy in broad daylight on a busy road, knowing full well she is injured.

“She must have been so terrified, running around such a busy area, all the while she is in such pain. She was not able to put any weight at all on one leg so must have been in agony.

“They then appear to just hand the poor dog to random passer-by. There are numerous vets locally who would have taken this dog in if they had asked for help. She has now been seen by vets and is doing well in our care. No bones were broken, but there are injuries to her foot which have gone untreated.

“We are extremely keen to track down these two men and urge anyone with any information about them to contact us on 0300 123 8018, in strictest confidence.”

The two men have both been described as having Irish accents and were in a plain white van with roof-racks. The first male was white with dark un-styled hair and stubble; wearing dark blue jeans, black boots, a long sleeved white top and a black gillet. He was thought to be in his 20s or 30s and was of medium to large build.

The second male was described as white, wearing a pale blue cap with writing across the front, light coloured trousers, dark shoes and a dark jacket. He is clean shaven and looks to be a less stocky build.

Poppy is receiving treatment for her injury and is recovering well. She will soon be ready to be rehomed.