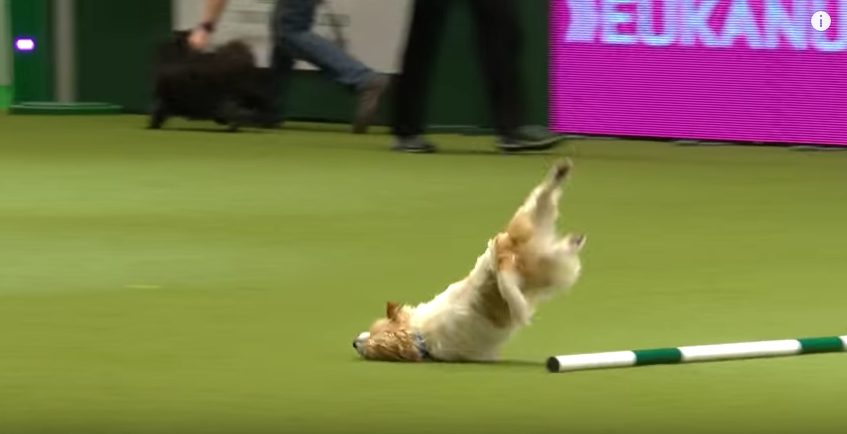 Even if you didn’t watch Crufts last week, you may recognise this little guy. The clip of Olly the Jack Russell taking on the agility course at Crufts has been shared all over the world, making him the unexpected star of the show.

Olly won the hearts of many after making multiple mistakes at the rescue dog agility display event on Friday, but dealt with it in a hilarious and inspiring way.

Despite taking agility classes for four years, Olly’s excitement got the better of him and he immediately forgot all he’d learnt. The five-year-old rescue took a tumble as he began but immediately got back up and continued, looking absolutely ecstatic. He then jumped over the A-frame but recovered well and finished by doing some exploring of the arena.

He was checked over by a vet after the chaotic performance before enjoying a relaxing massage and tucking into some tasty sardines to celebrate.

His owner, Karen Parker, says, “I didn’t think he could top last year’s performance, when he ran into the crowd rather than around the course. He’s like that all the time, he’s insane! One of the presenters showing the clip on TV news said, ‘We should all have a bit of Olly in us’ and I thought ‘I don’t think you need that!

“He had such a great time,” says Karen. “We’re already looking forward to next year!”

Karen adds, “At our training club he does everything beautifully, and then I take him to shows and he just loses it. He just switches off.

“He once almost did a whole circuit at a show, and then two obstacles before the end he saw a collie and went to say hi, and that was it.”

Blue Cross, the charity that rehomed Olly, have revealed where this enthusiastic dog came from and his life hasn’t always been so fun-filled. At just six weeks old, Olly was abandoned by the gates of the Blue Cross Herfordshire rehoming centre inside a cat carrier.

It was love at first sight for Karen, “I had lost my lovely Lurcher girl who was my world, and I needed to find my new best friend. Dogs just don’t live long enough.

“I saw Olly but another family had already booked to come and meet him that weekend. On the Monday morning I phoned up, before the centre was even open, and they told me ‘sorry, but he’s down as reserved’. They checked the list and he had been reserved to me! The other family had decided not to have him and I was next on the waiting list.”

He joined Karen’s family at 10 weeks old, and his name at the time ‘Loki’, after the Norse god of mischief, was changed to Olly. He now shares his sofa with 14-year-old Jack Russell-border terrier cross Boo, 10-month-old Jazz, a Jack Russell-collie cross, and Evie, a Jack Russell who belongs to Karen’s 11-year-old daughter Grace.

From being dumped to becoming a global canine superstar, Olly’s story really is a real rags to riches tale. Watch him again in that famous Crufts clip.