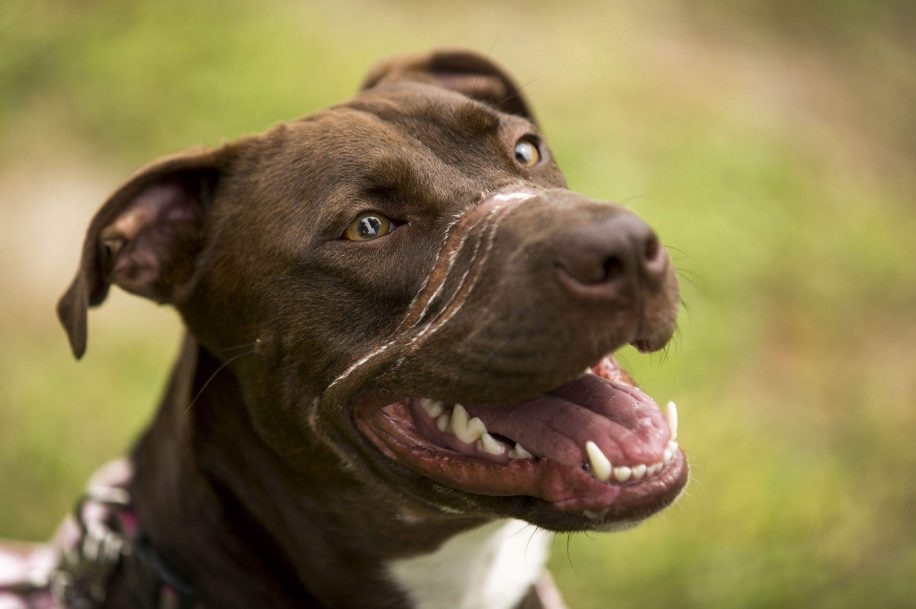 In late May 2015, Caitlyn’s ruined muzzle was everywhere. Found wandering in the streets in Charleston, South Carolina, USA, the Staffie cross had endured an estimated 36 hours of torment: her muzzle had been tied shut with electric tape so tight that her tongue, trapped between her teeth, was damaged by the lack of blood flow.

As her photos went viral, so did the unfolding story. Soon enough it transpired that Caitlyn, previously named Diamond, had very recently been sold by her owners for a handful of dollars to a Charleston man called William Leonard Dodson.  Dodson, 42, tied her muzzle with the electric tape to keep her from barking and left her tied outside his home. Caitlyn was able to escape and, after some wandering, was lucky enough to walk into her saviours: the staff and volunteers of the Charleston Animal Society.

Despite early fears she may have been left unable to eat, and might have to be put to sleep to prevent further suffering, Caitlyn’s recovering has been amazing. She became the face of abused animals anywhere, eventually starring in the Charleston Animal Society’s 2017 Firefighter Calendar. While she still bears the scars of her ordeal and lost part of her tongue, Caitlyn is living life at the fullest while Dodson was sentenced to five years in prison for animal cruelty last Friday, 24 March. Dodson was also sentenced to 15 years on “unrelated federal charges involving weapons”, and both sentences will run concurrently.

Charleston Animal Society Director of Anti-Cruelty and Outreach Aldwin Roman said, “Today’s plea shows progress, and we cannot say enough about the support from the community that made today’s outcome possible. We are committed to working with lawmakers, police and prosecutors to make sure justice is done for all animals who are abused like Caitlyn.”

Charleston Animal Society Director of Community Engagement Kay Hyman said, “Her story is inspiring to so many people for so many different reasons. It’s important to remember that a number of studies have drawn a link between the abuse of animals and violence against people. We need to all find solutions to stop this cycle.”

Five years is the longest possible prison term an animal abuser could face in South Carolina, which is a far cry from the UK. Had a such act been carried out in the UK, without the other charges, Caitlyn’s abuser would have only spent six months in prison at the very most. Battersea Dogs and Cats Home recently launched a campaign calling for tougher punishments, with the goal of increasing sentences to up to five years for the worst offences.

Images by the Charleston Animal Society.