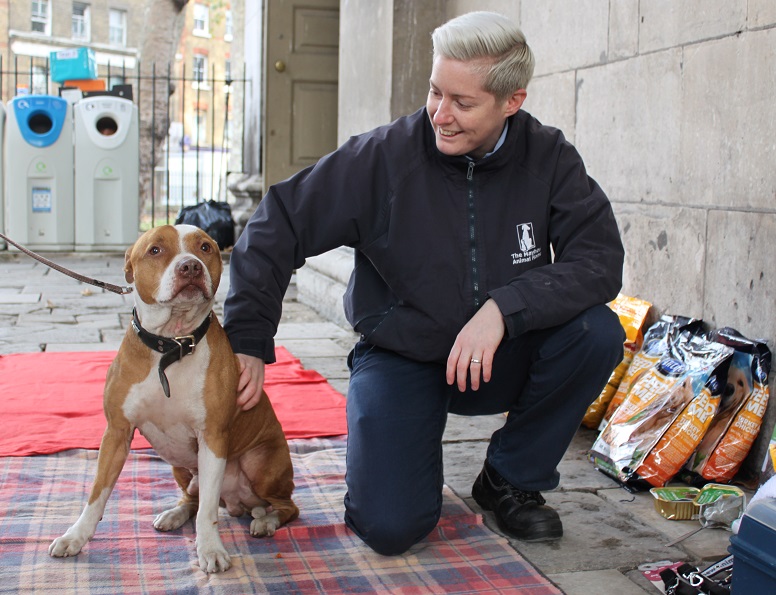 For a homeless person, a dog can be their only companion, but vet and food bills can place an added burden on a vulnerable person. This month, The Mayhew Animal Home will be marking 17 years since they began helping homeless owners and their pets.

As well as reaching out to rough sleepers, the charity visits 15 homeless centres regularly each year, including Thames Reach and The Salvation Army. Their Animal Welfare Officers offer all homeless dog owners free general health checks and microchipping, and also provide collars with tags and leads, jackets for dogs in the winter months, dog food, treats and poo bags.  The officers give advice and support to owners, and encourage free neutering, vaccinations and health checks at their Community Vet Clinic in Kensal Green.

Their recent visitors include 11-year-old Mimi, a black and white Staffordshire Bull Terrier, and eight-year-old Bobby, a blue Staffordshire Bull Terrier; they both visit The Mayhew’s Vet Clinic with their owner Andrew for a general health check. Andrew is one of the charity’s regular homeless hostel clients but this time he was concerned about some cysts and lumps he discovered on Mimi. A vet check was arranged straight away and both dogs were given flea and worm treatments.

On their visit to a homeless hostel they met Stella, a 15-year-old Staffordshire Bull Terrier. When Stella suddenly stopped being her bouncy self, worried owner Ian went to the hostel who then rang The Mayhew’s emergency number. An X-Ray revealed Stella had a serious tooth infection that was causing her a lot of pain. The tooth would need to be removed but first, the infection had to clear up. After a three-week long course of antibiotics and seven days of anti-inflammatories, the surgery went ahead and Stella also got a scale and polish, and flea and worm treatments. The Animal Welfare Officer continues to check in on Stella and Ian.

One homeless client, Linda, said, “My dog is my life. It’s me and Holly, that’s it, against the world. If I didn’t have these people then I wouldn’t be surviving with her. They are the best people ever to have about.”

The Mayhew’s Head of Animal Welfare, Zoe Edwards, said, “In this job you deal with a lot of situations where the owner is going through a hard time and just needs some support and advice to help them with their animal.

“We are often referred to as ‘Animal Social Workers’ because we are able to help and support vulnerable people in need with their animals – and ultimately keep the owner and animal together.

“I remember helping a local homeless man, Wully, and his two gorgeous dogs, Gallis and Bo. When I first met Wully he was sadly living on the streets and was completely addicted to drinking alcohol. He had been drinking since he was 11-years-old and would drink four bottles of super strength cider a day, and is convinced that he would not have survived much longer had we not persuaded him to put his dogs into our Pet Refuge programme and go to rehab.

“This case just shows how important our homeless work and projects are for vulnerable people and without them this could have ended very differently for Wully.”

The officers have built up a trusting relationship with their clients, so the homeless owners can turn to them whatever the situation, like Lucky and her owner Gulbar Hussain. Lucky was hit by a car while crossing the street near Portobello Road, London.

Gulbar said, “Who would do something like that? Hit a poor defenceless dog and leave them there to die. I was terrified. I’ve had Lucky since she was a puppy and she has always been by my side. The thought of not having her here scared the life out of me.”

The four-year-old Staffie had broken her hind right leg and fractured her pelvis. She was brought to The Mayhew to receive treatment and after three weeks she was able to finish her recovery with her owner.

The Mayhew’s Animal Welfare Officer, Tania Mazzoni, added, “A dog is often a homeless person’s only companion and they create this incredible bond. Lucky and Gulbar would be lost without each other and that’s why it is so important we try and keep them together.

“The Mayhew strives to tackle the companion animal welfare crisis from every possible angle. We are proactive and innovative, working to help animals and their carers by running outreach community initiatives.”