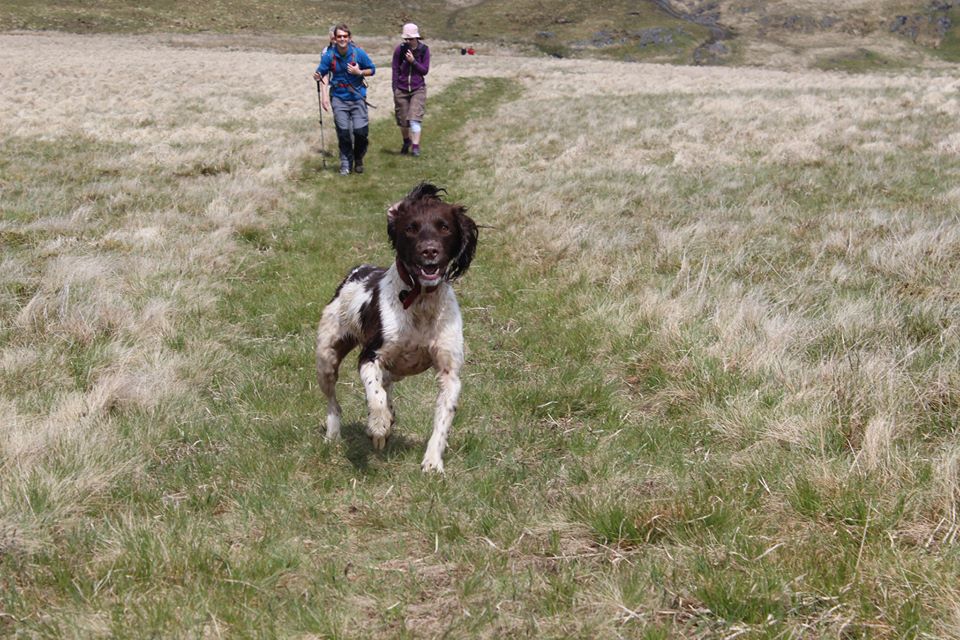 Most dogs enjoy a long walk, but for this lively Springer Spaniel, a walk in the park just isn’t enough.

Five year old Huw and his owners Heather and Colin have just completed The Great Glen Way, a 79 mile walk from Inverness to Fort William, one of three British cross country walks they’ve finished in the past four years.

In 2013, they walked across Wales from Knighton to Aberystwyth – a distance of 50 miles. In 2015, walking east to west, they followed Hadrian’s wall across England – another 79 miles!

“We have always enjoyed walking,” says Heather Martin. “We live in Wales so the cross walk was fairly local. Once we had completed that we got a taste for more and decided to try Hadrian’s Wall. Once that was completed we decided we couldn’t not walk across Scotland too so The Great Glen Way was chosen as a good route.

“Huw’s highlights are a swim at north beach Aberystwyth, running around the tree that appears in the Robin Hood film and taking the high road above Loch Ness.”

The idea for these long walks originally came about because of their passion for walking, or “running around in mad spaniel circles in Huw’s case”, says Heather. Now the trio have started fundraising for AGLM UK, a charity which supports Bulabakulu Village in Uganda by providing food, education and health care.

“We have raised £530 on this latest trip and one donation came in specifically labelled for Huw’s efforts.”

Preparation for the walks has involved lots of road running for Heather and Huw to “toughen his paws up”, which Heather says helped on the walks but they are considering booties in future. They also made sure his tick medication was up to date before they set out. Heather’s mother has helped to shuttle the walkers to and from each section to their campervan, meaning only day provisions need to be carried on the journey. This often includes a lunchtime jumbone for Huw to replace the calories he’s burned.

“Being a spaniel, Huw doesn’t really understand the idea of pacing himself so runs around like a crazy thing for the first few days, sniffing everything and exploring every ditch, moor, wood and lake. After that he does need a little more motivation after he gets tired. We found this trip that the phrase “lets go find grandma” tended to get him racing off ahead again, probably with the thought that the day was approaching its end!”

Their next walk has yet to be planned but Heather has her sights set on West Highland Way, Scotland, which they passed on their way home. After two days recovering, Huw was up and raring to go, so it won’t be long before the trio set out again on another cross country challenge.