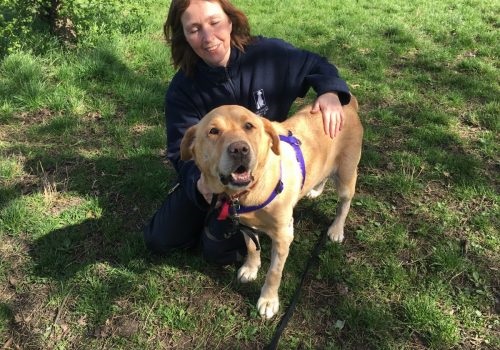 Hard to believe that a friendly and affectionate dog could be abandoned in such a sorry state, but that is exactly what happened to this poor Golden Labrador.

Nine-year-old Pattie was found wandering the streets near Kensal Green, London, and was brought to the charity The Mayhew Animal Home for treatment. When she arrived, Pattie was very wobbly on her feet, her skin looked very sore and she was extremely tired. She even fell asleep in the charity’s intake room.

The Mayhew’s vet team gave Pattie a thorough health check and found she had very red and itchy skin, believed to be a form of allergic dermatitis. She was given a deworming tablet and flea treatment and was prescribed her medicated bathes twice a week for a couple of weeks.

Pattie’s ears had also become infected and she was limping due to having stiff, inflamed joints. She was prescribed ear medication and anti-inflammatory pain relief. After a few weeks of treatment and a new healthy diet, her skin and ears began to improve.

This lovable Labrador found a new home straight away and has been renamed Lily. She’s now enjoying her new life in her new home. Here she is enjoying lots of rubs at the charity’s centre.