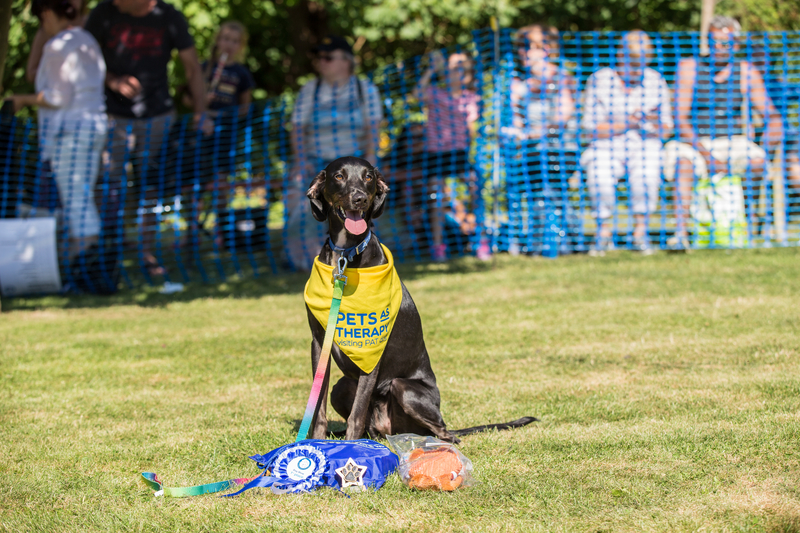 Last weekend, hundreds of dogs and their owners descended on Battersea’s Old Windsor’s centre for their annual fun day event – but it was the emotional dog classes that stole the show.

Unlike other dog shows, the dogs who won prizes in these classes were judged on the power of their stories, rather than looks. Two-year-old Luna was the title of Best Battersea Dog with her incredible transformation from hyper puppy to therapy dog in training, thanks to the patience of her new owner.

The lurcher arrived at the Berkshire centre as a stray in November 2016. She was undersocialised and stressed, which lead to boisterous behaviour but her new owner vicky Burr was determined to turn her around.

Vicky says, “We didn’t even mean to get a dog. We’d just came to Battersea Old Windsor for a visit and we saw Luna out for a walk. The lady who was holding her said Luna would normally jump up, but she was very calm with us. She’d never been like that with a stranger before.”

Staff at the centre told Vicky that although they were working on her behaviour, she would be an long-term project. At first lLuna lived up to her reputation as an overgrown puppy, but eventually her personality began to shine through.

Vicky continues, “She was a real basket case when we got her, but she’s really turned around. It was really hard work, but we persevered with her. She’s come so far and I’m so proud of her.”

Luna is progressing so well that Vicky is now hoping she will become a Pets as Therapy dog and help children learn to read.

“Some children who struggle with reading can find it easier to read to a dog – because dogs are non-judgemental. I also hope to take Luna into residential homes,” Vicky adds.

Battersea Old Windsor’s Centre Manager Kaye Mughal adds, “Luna was an obvious choice to win Best Battersea Dog, because she’s gone through a massive transformation in her new home. We also wanted to acknowledge all the hard work that’s gone into training her. At Battersea, we have a range of dogs for people of all levels of experience. But we think it’s especially important to acknowledge those adopters – like Vicky – who are willing to take on a dog that needs some extra work to make them the best canine they can be.”

Another dog show winner was Frank, a 13-year-old Staffordshire Bull Terrier who won the Golden Oldie category. Frank was adopted form Battersea’s London centre when he was six months old by Rachel Mailley. He went on to become of of the first dogs in England working to help people overcome their cynophobic – fear of dogs.