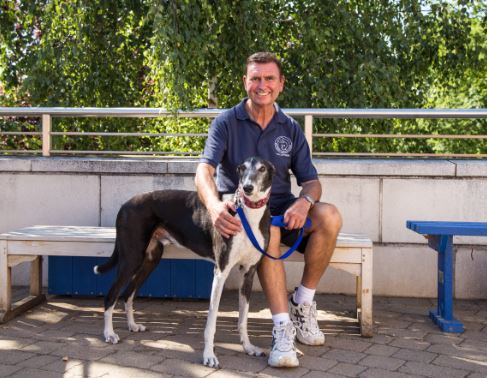 Over a thousand volunteers help rehoming charity Battersea Dogs & Cats Home care for cats and dogs every year, but some will go that extra mile.

For the last six years, devoted volunteer Rob Carter has made an incredible 97-mile journey from his home in Ringwood, Hampshire, to the London site – making him one of Battersea’s furthest travelling volunteers.

The football coach, who spends on average two to three hours commuting to his volunteer role, began helping in the Community Engagement team which raises awareness of responsible dog ownership. He then began helping across the charity, including organising fundraising events and caring for cats in the cattery.

Whilst at Battersea, Rob has taken part in major events including performing for The Queen in The Patron’s Lunch entertainment parade, taking part in Battersea’s rehoming events, and meeting Battersea’s Royal Patron HRH The Duchess of Cornwall.

Rob says, “My passion for the charity began a few years ago when I sadly lost my ex-Battersea dog. I wanted to give back to the Home and decided to sign up as a volunteer – I haven’t looked back since. I’ve been able to experience things I could never imagine, such as meeting our former Prime Minster, to making friends for life. I feel very lucky to be a part of the Battersea family and the long journey is definitely worth it.”

Thanks to the generosity of players of People’s Postcode Lottery, who donated £200,000 in 2016, Battersea has been able to expand its Volunteering and Fostering Department and provide support to volunteers such as Rob.

Charlotte Fielder, Battersea’s Head of Volunteering & Fostering, says, “We really value the incredible contribution our volunteers and foster carers make to the work we do here at Battersea, and Rob is a prime example of their dedication to the Home.

“Luckily for us we have received financial support from players of People’s Postcode Lottery which has helped us grow our volunteer programme meaning our volunteers can do even more for our dogs and cats.”

If you’re interested in becoming a volunteer or fosterer for Battersea visit their website for more information.