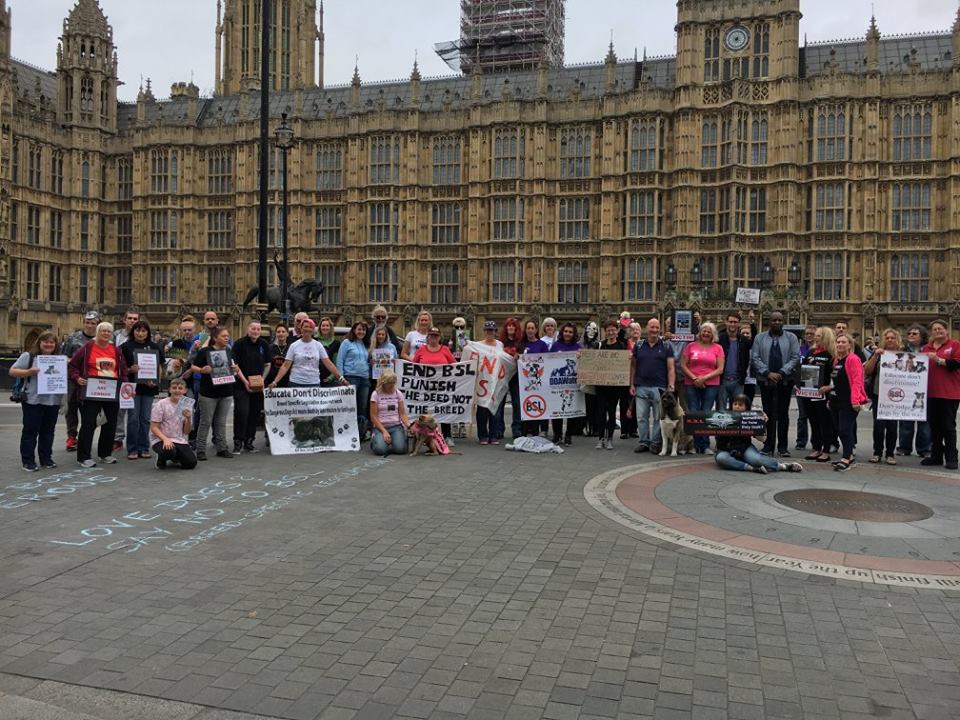 London took part with a peaceful protest at Westminster on Saturday 15 July and there were also awareness events in Coventry, West Midlands and Cardiff, Wales.

The Westminster protest was organised by DDA Watch Ltd, a campaign group which helps and supports dogs and their families affected by the Dangerous Dogs Act 1991, and this years’ event marked 26 years of failed, unjust dog law in the UK.

Dog lovers travelled across the UK to take a stand for innocent dogs and to call for a repeal of a failed piece of legislation that targets types of dogs and condemns them as ‘dangerous’ based on their physical appearance.

The Westminster protest was a grass-roots gathering, with volunteers present who actively campaign and support innocent dogs and their families being torn apart by breed specific legislation on a daily basis.

Attending to support the event was veterinary surgeon and animal behaviourist Dr Kendal Shepherd MRCVS, canine behaviourists Robert Alleyne and Jordan Shelley, and dog trainer for film, television and stage productions, Robert Stuhldreer with his beautiful assistance dog Flora. One supporter was dressed as the ‘Grim Reaper’ with a message for Defra attached to the black outfit which said ‘I am Breed Specific Legislation’ and gave out information leaflets to those passing by outside the Parliamentary buildings.

Giving out plenty of canine kisses was Battersea Dogs Home Ambassadog Whippet, a Staffordshire Bull Terrier who came along to support the event with her mum, Chris McLean. Whippet wore a pink coat with the words ‘Breed Specific Legislation Murders My Friends’ written on it, raising awareness for her doggie pals.

At the event, dog lovers wrote personal messages to the Government on a large white sheet headed ‘People’s Messages to Defra – 26 Years of Tears’; some in memory of much loved dogs who had never put a paw wrong and have been killed by the outdated legislation. Another dog named Paul who lost his life to BSL in 2015 was remembered, his casket of ashes brought to the protest to show the end result of the many dogs affected.

Banners and placards were held up outside Westminster including a photograph of Lennox, a canine victim of breed specific legislation from Northern Ireland whose death five years ago this month had sparked global outrage and condemnation.

Many members of the public were shocked to learn that this is what can and often does happen in the UK and overseas, to pet dogs who have never bitten or hurt anyone. Passers by stopped to express their support and further petition signatures were gained to help create awareness of the situation.

Maria Daines, a Director of DDA Watch and one of the event organisers says, “It is high time breed specific legislation was at least extensively debated in parliament with a view to repealing section 1 (DDA) which has proven over 26 years to be ineffective, unfair and cruel to the dogs and families affected by it. Education (as opposed to prohibitive legislation) is necessary and helps to keep dog owners, the public and canine companions safe; Banning, restricting and killing dogs that look a certain way is ridiculously outdated, heartbreaking for many and a waste of public money. In 2017, we can and should be doing much better for our canine friends, their families, the public and those who work with dogs, including stray and rescue dogs.”