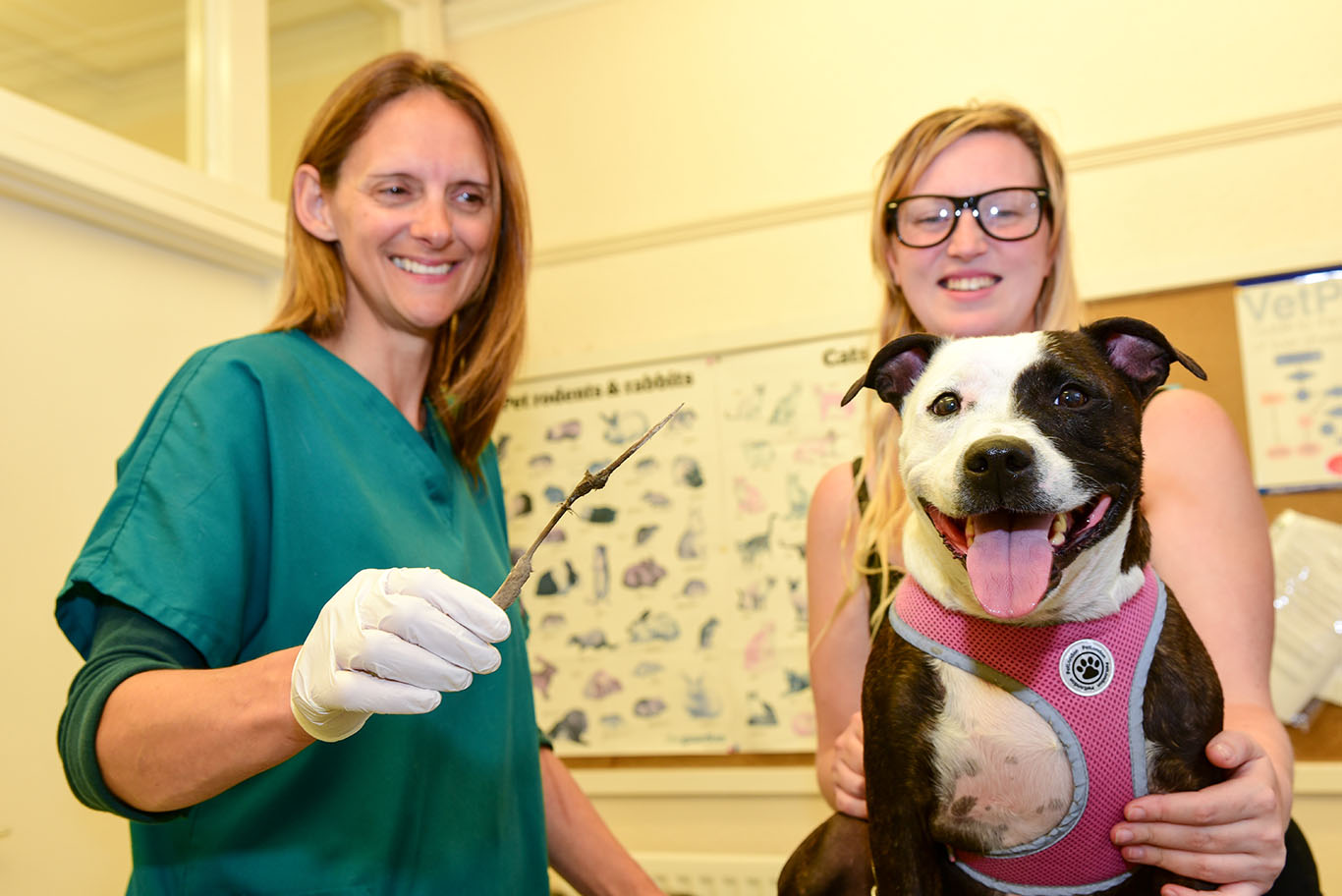 When Patch’s owner noticed the Staffie wasn’t acting herself, she whisked the six-year-old pooch off for an examination at Lymm Veterinary Surgery, part of Willows Veterinary Group.

Vet Rachel Dean acted fast and discovered that Patch had swallowed a six-inch wooden stick that had made its way almost entirely through the much-loved pet’s digestive system, getting stuck just towards the end.

Rachel said, “I’ve been a vet for 20 years and never seen anything quite like this case before. When I examined Patch I found something slightly embedded in the wall of her back passage. It was thin and sharp and at first I thought it might be a stick or sharp piece of spare rib-bone that she’s picked up and swallowed.

“After sedating and x-raying her, I discovered it was actually a kebab skewer that was the problem and I gently manipulated it out of her. If I hadn’t been able to get it out that way she could have needed surgery. If it had been left there it would have had some very serious consequences and she might even have died.

“It was incredible that the skewer hadn’t done any damage. It came all the way through her stomach and bowel without perforating anything, which was so lucky for her. At times it must have been very painful but she’s a very brave dog and just seemed to take everything in her stride. She’s since made a tremendous recovery.”

Vet Rachel and owner Becky have now joined forces to warn other pet owners to be on their guard against discarded barbecue waste during the rest of the summer months.

Becky adds, “I have nothing but praise for the way Rachel spotted what was wrong and then acted so quickly to do something about it. She’s brilliant and if it weren’t for her we’d have lost Patch.

“My partner Andrew and I spotted Patch wasn’t acting like herself. She didn’t want to get out of bed, which isn’t like her as she’s usually very lively, and wasn’t going to the toilet as normal. Amazingly, the tests showed no damage had been caused and Patch was allowed to come home later that day. She’s now doing fine and seems none the worse for what happened to her.

“Patch is a bit of a crazy dog and this isn’t the first time she’s been in trouble after swallowing something she shouldn’t. She’s guzzled down one of the kids’ dummies on three occasions and had to have an operation to get one of them out when she was about six months old.”

Despite having family barbecues at their home, Becky says they never use skewers due to the risk they pose to their dogs and doesn’t know where Patch picked one up.

She adds, “I’m telling Patch’s story so that owners can be on their guard against this sort of thing. She was so lucky that we got her to the vets in time and didn’t suffer any internal damage.”

Rachel agreed and added, “Nobody knows where Patch picked up the skewer but I’d like to underline what her owner Becky says about other dog owners being very careful when it comes to discarding barbecue waste, especially at this time of year.

“This case also shows how important it is to have animals properly checked over by a vet if you think there’s something not quite right with them.”