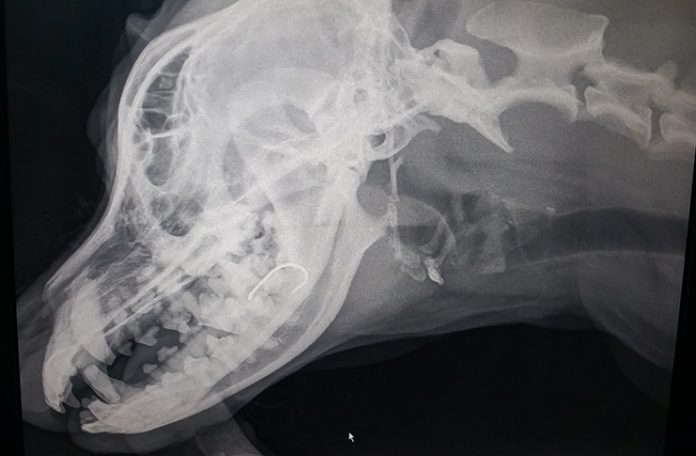 A Schnauzer is recovering after getting a fish hook embedded in her jaw whilst out on a walk last month.

Lola was sniffing out a tasty treat when she accidentally ate a fish hook and fishing line in Ravensbury Park, London. A fisherman had left a rod with bait still on the hook while he fished in another spot.

The 11-year-old was rush to the Blue Cross animal hospital in Merton, south west London, by her concerned owner Pat Donaldson. X-rays revealed a large metal hook embedded into Lola’s lower palate with the line still attached. If Lola had swallowed the hook it could have caused irreparable damage to her throat and stomach.

Owner Mr Donaldson, 54, from Morden, Surrey said, “You could see the line hanging out of her mouth. I thought she had swallowed the line and the hook.

“I called the Blue Cross and rushed her to the hospital in Merton but thankfully x-rays showed the hook was still in her mouth and not in her stomach. She was so lucky to have not swallowed it as it could have caused awful damage.”

Blue Cross has warned dog owners to be vigilant when out on walks but also called on fishermen to ensure they keep fishing tackle and bait nearby and also to dispose of it properly afterwards to prevent incidents like this.

Laura Vico, Blue Cross Senior Vet, said, “Lola was sedated and thanks to the X-rays we were able to locate the hook and remove it.

“She was very lucky not to have swallowed the hook as it could have caused irreparable damage to her oesophagus and could have proved fatal.

“Dog walkers should be vigilant when out on walks while fishermen should think to dispose of their fishing tackle in a responsible manner as it can be dangerous to not only dogs out walking but other wildlife too.”