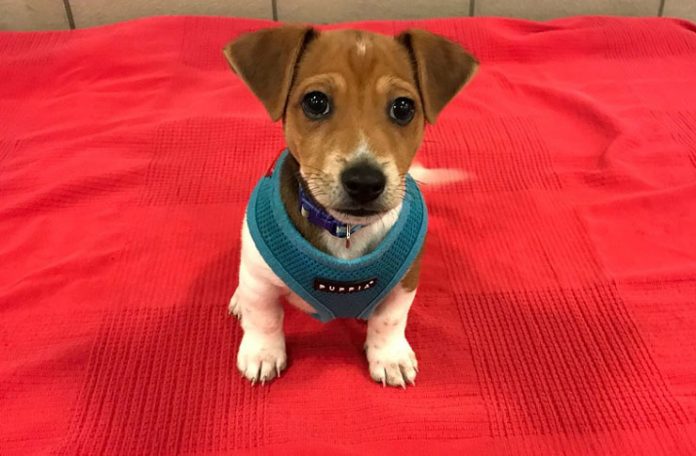 A three-month-old Jack Russell, who was bought while the buyer’s parents were on holiday, but later was no longer wanted, has found a new home.

Donnie had been sold to a young buyer while their parents were away but when they returned, they couldn’t cope with the new pup and he ended up at the London-based charity, Mayhew.

Mayhew’s Head of Animal Welfare, Zoe Edwards, said, “There are already so many unwanted animals in rescue centres like ours that have come from people who buy pets on a whim, without taking into consideration the responsibilities and needs of the animal.

“At Mayhew we do not judge and we are here to assist and advise pet owners on the best course of action for their animal.

“Absolutely anyone over the age of 16 can walk into a pet shop or buy any animal they want online. There are no checks on the reliability and ability of buyers to look after pets.

“Mayhew is a member of the Pet Advertising Advisory Group (PAAG), which aims to ensure that pets advertised for sale are done so legally and ethically. It also aims to raise public awareness of the need to act responsibly when buying pets from websites and the need to do research before making any purchase. We ask that owners think responsibly about where they get their pets from and consider adopting a rescue dog or cat first.

“When getting a new pet you should always consider whether you will be able to look after them correctly, and if you are able to provide them with the Five Welfare Needs including a suitable environment and the need to be protected from pain, injury, disease, and suffering.”

Ater a thorough health check by the charity’s vet team, Donnie was put up for adoption and quickly found a new home. He has since been renamed Peanut and is enjoying his new life.

Peanut’s new owner, Steve, said, “Peanut is full of beans and is learning very quick. After a couple of hours of chasing a ball, he likes to rest – he snores very loudly and even barks in his sleep.

“He may be very excitable, but he makes up for it by being cute and loveable. My previous Jack Russell reached 17 years of age and I’m hoping that Peanut will do the same.”

Many charities, including the Mayhew, are supporting the governments call for evidence on whether third-party puppy sales should be banned. All interested parties have been invited to share their views by May 2, 2018.