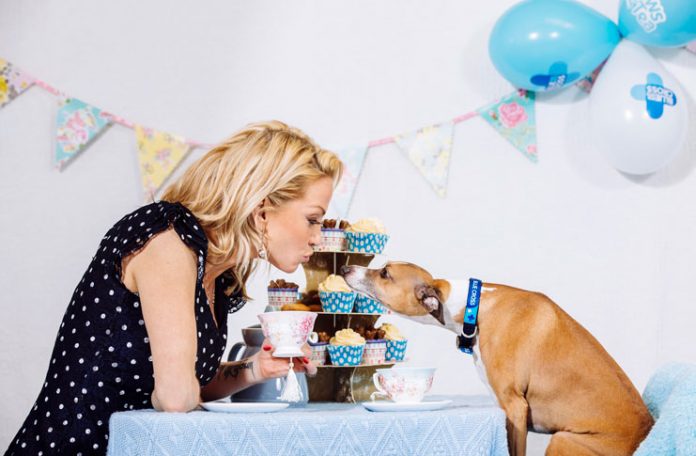 The singer is calling on animal lovers to host a tea party for friends and family in aid of Blue Cross after visiting the charity’s rehoming centre in Lewknor, Oxfordshire.

During her visit, Sarah met five-week-old kittens Sage and Salsa who were born earlier this year when their mother Mouse was brought in heavily pregnant. The Celebrity Big Brother 2017 winner also met Italian greyhound Gino [main photo] who was rehomed by Blue Cross in 2015. The five-year-old regularly returns to the rehoming centre to act as an ambassador dog where he provides canine support to other dogs who may be nervous in their new surroundings or unsure of being around other dogs.

A pet owner herself, Sarah said, “My pets are like my best friends and I just couldn’t be without them. After meeting some of the beautiful cats and dogs needing homes at Blue Cross Lewknor, I’m so proud to be supporting the charity and really hope I can encourage lots of animal lovers to take part in the Blue Cross Paws for Tea campaign.

“It’s so simple – just get together with your friends or family over a nice brew and a slice of something tasty.  You’ll not only have a lovely time, but the money you raise will help Blue Cross change the lives of pets all over the country. Go on, pop the kettle on for these wonderful pets!

“I remember growing up we always had Battenberg cake in the house, which was brilliant, but I think my all-time favourite remains butterfly cakes because I just love the buttercream icing – I could literally just eat that all day and I would be happy!”

This year the charity hopes to raise £70,000 through the campaign. All money raised will support sick, injured and abandoned dogs, cats, small animals and horses in the charity’s care across the UK.

Heather Collin, Blue Cross Community and Events Regional Manager, said, “We’re so excited to have Sarah on board supporting our Paws for Tea campaign this year.

“Blue Cross helps tens of thousands of pets every year and it’s events like Paws for Tea which raise the vital funds to make that possible as being a charity we receive no Government funding.

“This year we’re hoping to raise £70,000 – with every penny going towards helping animals coming through the doors of our rehoming centres and animal hospitals across the country every day.”