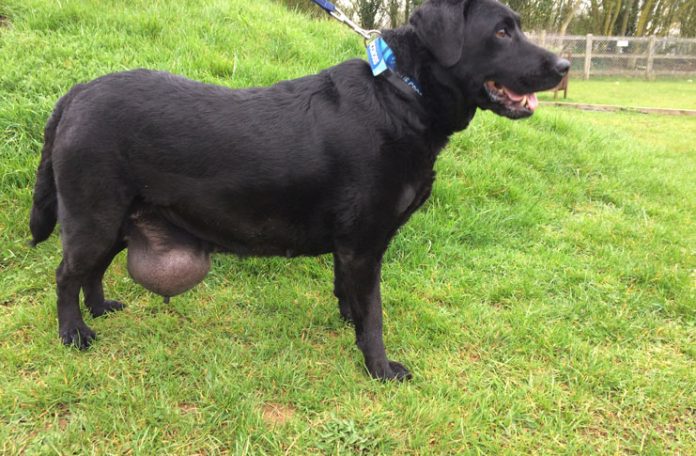 Lucy the Labrador is recovering after she had life-saving surgery to remove a 2kg tumour from her abdomen.

Her owner had recently passed away and she was in need of a new home, but staff at Blue Cross’s rehoming centre in Burford, Oxfordshire, were said to be shocked when the six-year-old arrived with a huge mammary tumour. It took vets two hours to remove the cancerous mass, which weighed more than two bags of sugar.

The black Labrador was also neutered to prevent uterine disease in future and reduce the chances of future hormone-related problems. Lucy is now resting from her surgery in a foster home.

Laura Crofts, small animals manager at Blue Cross rehoming centre in Burford, said, “We’re over the moon to see a happy ending for Lucy. She was brought into us for rehoming after her owner died and it seemed she had just got used to the massive lump hanging down from her abdomen. It must have been so uncomfortable for her and we’re not sure how long she had been putting up with it.

“She’s making a great recovery and is doing really well in her foster home, she’s such a chilled dog and takes it all in her stride. She still splays out her back legs because she’s got so used to walking with the mass. Hopefully she will realise she no longer has to do that now.

“Cases like this really show the importance of getting your dog or cat neutered as this greatly reduces the chance of mammary tumours like this occurring. Studies show more than a quarter of female unsprayed dogs will develop a mammary tumour during their lifetime and some of these can prove to be fatal.

“Luckily Lucy is on her way to her happy ending and we hope in time she will be ready to go up for rehoming and the team here at Burford can find her a loving new family to go to.”

Lucy’s surgery is estimated to have cost the charity around £1,000 and a JustGiving page has been set up for her treatment costs. You can follow Lucy’s story on Facebook.