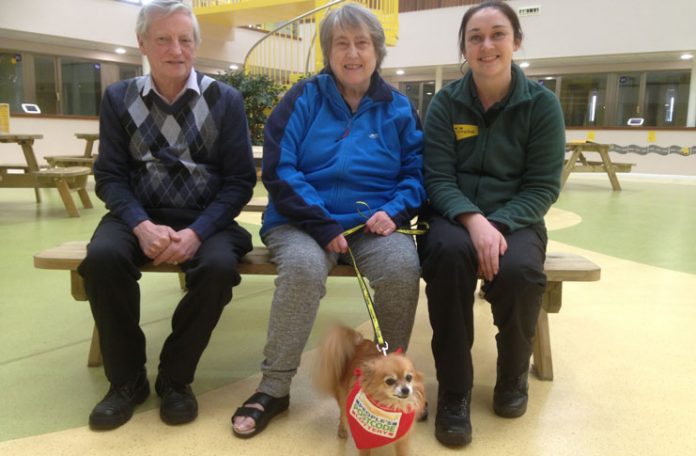 A homeless Pomeranian cross called Whitney has found herself a new home – over 400 miles away!

The nine-year-old was handed into Dogs Trust Manchester when her family’s circumstances changed, but luckily she was spotted on the charity’s website by Ronald and Valerie Moffat (main photo with Whitney and Tracy Hill).

Despite living on the shores of Loch Ness, Ronald and Valerie decided to travel more than 400 miles to meet the pooch.

Says Valerie, “We have adopted two dogs from Dogs Trust before but from the Glasgow rehoming centre so rather closer to home! Our ten-year-old Corgi, Chloe, passed away just before Easter and the house isn’t a home without a dog so we wanted to adopt again.

“I saw Whitney and as luck would have it Ronald was working in the Manchester area so I immediately called him, he popped in and then I flew down the next day to meet her. as soon as I saw her she completely melted my heart! She is perfect.”

Whitney has also taken the accolade of being the 100th dog who has found her home whilst being cared for through the charity’s fostering scheme, ‘Home from Home’.

Set up two years ago, the Home from Home scheme provides foster ‘aprents[ for dogs who find kennel life a little stressful, such as pregnant dogs, sick dogs, puppies and elderly dogs like Whitney. The scheme and its 36 foster carers are managed by Tracy Hill whose role is supported by players of People’s Postcode Lottery.

Says Tracy, “The on-going support of the generous players of People’s Postcode Lottery means that dogs like Whitney can be cared for in a foster home until their special someone comes along. Being able to place dogs in foster homes also means we free up kennel space, enabling us to take in and care for more dogs at the rehoming centre.

Lottery team recently visited the Denton-based rehoming centre to reveal the latest winning postcode which was in Audenshaw.

Adds Tracy, “It was really exciting to have the team here and the fact that they were at the rehoming centre on the day we were celebrating Whitney heading off to her forever home was perfect! Congratulations to all the local winners but I think Valerie and Ronald definitely think they are the luckiest people now they have adopted Whitney.”