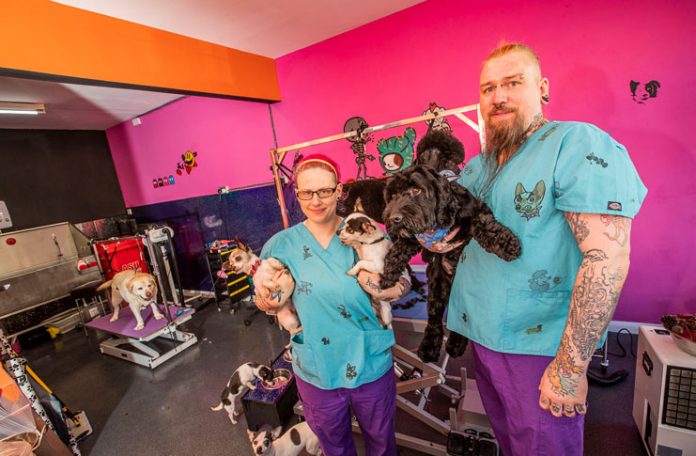 A campaign has been launched to make the Bay of Colwyn a dog-friendly area for four-legged visitors.

Local businesses are being urged to sign up to the Green Paw Print project which will highlight all the shops, pubs, restaurants and other premises in the area that welcome dogs.

Danny Borrill, who runs Alternadogs grooming salon Greenfield Road, Colwyn Bay, with his wife Kat, is leading the scheme. With the project, businesses will sport a sticker on their door or window, and be listed on the Alternadogs website so dog owners can plan their visit in advance.

The scheme has also won the backing for business enterprise Colwyn BID, run by business communities in Colwyn Bay, Rhos-on-Sea, Old Colwyn and Mochdre, which believes it will bring in more pet-loving shoppers and tourists.

Anna Openshaw, project manager at Colwyn BID, said, “I think Danny’s proposed scheme is a really good idea that would be of benefit to local businesses. The idea is simple but effective and if it can help drive more visitors and particularly dog owners to the area and get them spending money then that can only be a positive thing.

“We will provide Danny with all the support he needs to get the project off the ground. It’s great that a new company arriving in the Bay is so keen to get involved with the business community and is also being proactive.

“Alternadogs is a welcome addition to the area and I’m sure the business will be a huge success.”

Danny also wants to see a dog walking trail around the area, highlighting places where pooches can be exercised. His grooming salon even hands out free poo bags to ensure that owners act responsibly and clear up after their pets.

The couple, who own Poodle Betty, Cockapoo Jeff, Chihuahuas Pip and Holly, and 14-month old pups Brutus and Pepper, used to run a salon in St Helens before moving and their loyal customers now make the 90-minute journey with their pets to retain their services.

Danny, 37, said, “We opened the new salon in Colwyn Bay on March 12 and we’ve had a really busy start. We have a lot of people coming from St Helens, Manchester and Widnes, particularly on Sundays. They come and have a day out or stay here for the weekend. We’re bringing a bit of tourism to the area which is why I came up with the idea.

“We want people to spend their money in the area when they come. However, when you get here there is nothing to tell you it’s dog-friendly place. People simply don’t know.

“I asked a few businesses if they allowed dogs in and they said yes of course, so we need to inform people visiting the area so they can book in advance and plan ahead. When people come here they want to buy a gift to take back or eat locally sourced foods. By showing the Green Paw Print and having a list of dog-friendly businesses on the website they know where they can go.

“The aim is to bring the business community together to drive traffic here. Colwyn BID has been very supportive of the idea. If businesses want to get involved and help that would be great.”

He and Kat first launched their business in May 2017, when Danny become unemployed after the company he worked for folded. Then Danny fell seriously ill with Lofgren syndrome (a form of Sarcoïdosis that affects the lymph nodes) and Sweet’s syndrome (a skin disease brought on by the sudden onset of fever), which was shutting Danny’s immune system down.

After a year, Danny had recovered and it was time for a change, “We both thought there has got to be a better life out there for us. We really wanted a joint venture and to run our own business.

“We’re both dog lovers so our idea was born. We decided to open a shop in St Helens and we were overwhelmed by the response. We were going back and forth to North Wales a lot to see my parents and Kat said one day why don’t we move here, so we did.

“It’s gone really well so far. We’ve got our hands full but I wouldn’t have it any other way. The dogs can come to work with us too so everything works nicely. We go for a walk to the beach in the morning and then take them to work. It works brilliantly.”

For more information and to plan your visit to the bay of Colwyn, go to alternadogs.co.uk