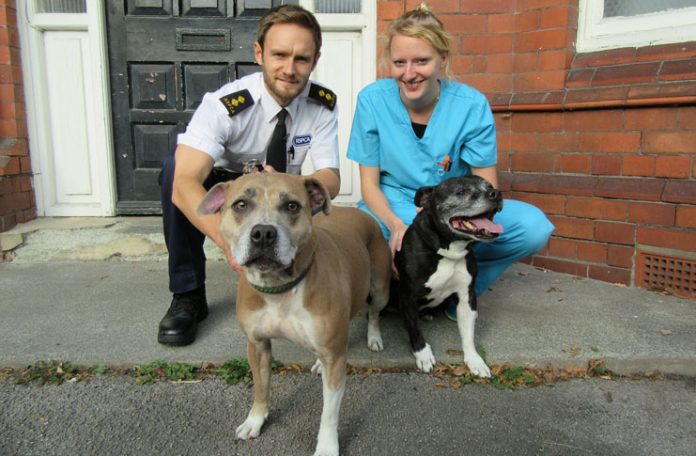 Two senior dogs who were rescued by the RSPCA, have found their forever home after spending more than 500 days in the charity’s care.

Ten-year-old Kaya, who was beaten in public by her owner, and her friend Kane, 13, will have their story told when they appear on Channel 5’s Dog Rescuers.

The pair arrived at the animal charity’s Wirral branch in October 2016 while investigations and prosecution took place over Kaya’s ordeal. They were both covered in fleas, but despite the shocking footage captured on CCTV, Kaya had no long-term damage.

They have been available for rehoming since October last year but sadly had no interest from potential adopters until recently, and have been in RSPCA’s care for a total of 534 days.

RSPCA inspector Anthony Joynes, who rescued the pair, said, “Kaya and Kane are two energetic and lovely senior dogs and I’m thrilled they have finally found their forever home.

“Kaya’s case was very distressing with CCTV footage capturing the moment her owner punched her and saw her cowering in the street. Thankfully, we were able to find Kaya and rescue her and Kane who have now been given a second chance.

“They are rather senior dogs, but they are both very active, loyal, loving dogs with great personalities. Both of them love long walks and their favourite thing is playing ball – despite their ages, they are still full of beans!”

After a long wait, the pair were rehomed to Sule Denizer from Greater London in April.

Sule said, “They settled in well from the beginning, when we got home they couldn’t stop smiling.

“They are such a good match for me and when that day comes I will be lost without them but to be honest it was the fact they are older that made me want to adopt them as I wanted to give them a good quality of life in their old age.

“As soon as I saw them my heart had already decided for me that I was going to bring them home and I travelled quite a long way!”

Sule has owned Staffordshire bull terriers for years but her last dog, Vinnie, passed away 18 months ago and her house felt empty without a dog.

She continued, “I must thank RSPCA Wirral who have been absolutely fantastic. Kaya and Kane were in kennels for 534 days but they didn’t become institutionalised. They are born again actually, you can see on their faces that everything is new and exciting to them.”

According to Sule, the pair remain very close and both enjoy a ride in the car. Kane enjoys playing with his ball and will sniff it out straight away.

Sule added, “After everything Kaya in particular has been through the level of trust she has with human beings still amazes me each day.”

Kaya and Kane’s story will appear on the new series of Channel 5’s Dog Rescuers on Tuesday, June 12 at 8pm.