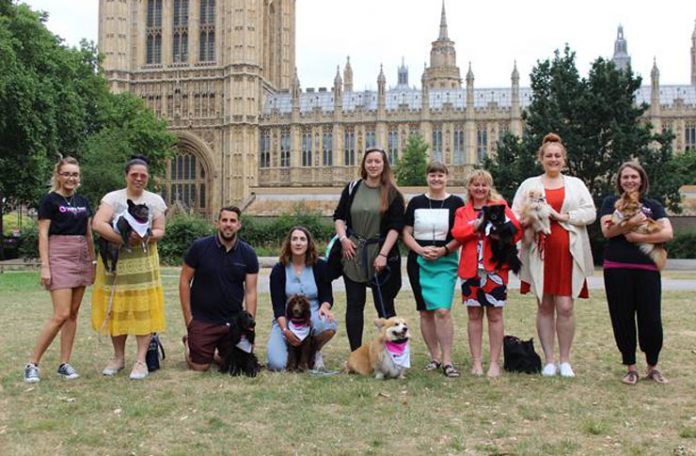 Social media stars such as Marcel Le Corgi joined Cruelty Free International at Westminster on Tuesday to support an end to the use of dogs in UK experiments by 2020.

The organisation which calls for an end to animal testing, hosted a walk around Westminster as part of their Lead the Way campaign. The event coincides with a petition launched last month which asks for a parliament to debate UK dog tests and has been signed by Ricky Gervais and Leona Lewis. The petition needs to reach 100,000 signatures and has so far been signed by 20,000.

Canine celebrities such as Marcel Le Corgi, Elle the Frenchie, Steph and the Spaniels and the City dog Expert’s Pomeranians Broadway, Folly and Jester met with Dr Lisa Cameron, MP for East Kilbride, Strathaven and Lesmahagow and Chair of the All-Party Parliamentary Dog Advisory Welfare Group in front of the Houses of Parliament to pose for photos and urge the government to act.

Aurélie Four, companion to canine internet star Marcel le Corgi, said, “Marcel and I are very happy to be here today to support the Cruelty Free International Lead the Way campaign for an end to UK dog tests. Dogs like Marcel are sensitive and compassionate animals who belong in loving homes not laboratories. We urge everyone to sign the Cruelty Free International petition and put a stop to these horrible and unnecessary experiments.”

Across the country, supporters took part in their own dog walk to call on Home Secretary Sajid Javid to put a stop to cruel and unnecessary dog testing in the UK within two years.

UK law means tests must often be carried out on rats or mice in addition to a second species, usually dogs, before proposed medicines can move to clinical trials but campaigners say many more humane and human-relevant non-animal alternatives exist, and many of the medicines that go on to clinical trials fail.

Cruelty Free International has proposed to work alongside the Home Office to chart a progressive roadmap away from the use of dogs in toxicity testing and provide knowledge and expertise to develop a strategy.

Michelle Thew, CEO of Cruelty Free International, said, “We think the UK public would be horrified to learn that thousands of dogs continue to be used in cruel and unnecessary experiments every year. Our aim is to sit down with government and industry to draw up a consensual road map and get dogs out of second species regulatory testing use in the UK. Thank you to all who have already signed the petition to Parliament. We now need to reach 100,000 signatures to trigger a debate which can end this needless suffering.”

Dr Lisa Cameron, MP for East Kilbride, Strathaven and Lesmahagow and Chair of the All-Party Parliamentary Dog Advisory Welfare Group, said, “As a nation of animal lovers, the UK should lead the way in reducing animal testing. Dog experiments are unethical and outdated and there are many credible and effective alternatives that can be used instead. I am delighted to support the Cruelty Free International call for the Home Office to review and put in place a roadmap to end the use of dogs in UK laboratories.”