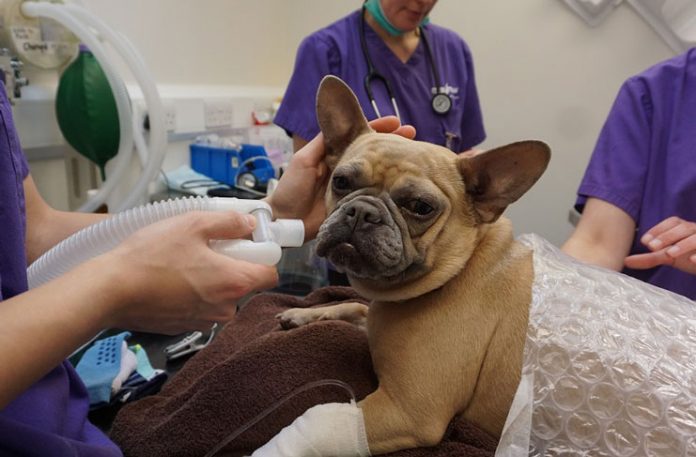 A French Bulldog called Elsa has received treatment after ending up in the care of animal welfare charity Mayhew whilst suffering from multiple health problems, including an inverted tail.

The five-year-old was one of seven French Bulldogs aged between one and five to be handed into the charity within the space of one month. Elsa’s screw tail had grown inside her body and the resulting tail pocket was continuously getting yeast and bacterial infection. The bony part of her tail pushed inside her rectum causing the area to be extremely itchy and painful.

Six of the Frenchies were treated for varying degrees of health problems including chronic ear infections, skin conditions, and dental problems, but Elsa’s case was the worst.

After months of treatment to clear the infection, Mayhew’s experienced vet team were able to surgically remove the bony top of her tail.

“The surgery was successful although Elsa was very poorly following the operation. Many brachycephalic breeds, with French Bulldogs often being the worst, are prone to vomiting post-surgery and Elsa suffered badly, so anti-sickness medication had to be prescribed.

“Brachycephalic breeds suffering from an inverted tail tend to wiggle their bottoms against the floor due to the infections and itchiness. You may have seen videos online showing this and many people think it is a funny or cute trait of these breeds, but it is actually caused by pain and discomfort.”

Over the last few years, the popularity of brachycephalic pets such as Pugs and Bulldogs has soared and the French Bulldog was recently named the UK’s most popular breed of dog, overtaking the Labrador. Sadly many can end up abandoned due to ill health or from being bred to sell and no longer wanted.

Not all screw tail dogs are as lucky as Elsa, whose condition was operable. A dog’s vertebrae are the bones in its spine, but unlike humans, in healthy dogs and puppies, the bones of the spine extend way beyond the pelvis to form a long straight tail.

Head Vet, Dr Ursula Goetz, added, “Screw tail dogs such as Pugs and French Bulldogs can suffer from malformed spinal bones, known as hemivertebrae, which have an odd shape that can cause the whole spinal column to twist.

“If these bones are confined to the tail, the twisting may not affect the dog’s spine in any significant way. But if there are deformed hemivertebrae bones in the main part of the spine, the twisting can put pressure on the spinal nerves that lie within the column of vertebrae and result in neurological problems for the dog. Thankfully, Elsa hasn’t shown signs of any neurological issues.”

Due to her bulging eyes, Elsa’s eyes constantly water as they are exposed to more air and dry out quicker. A lack of proper tear draining means that Elsa also gets tear stains between the skin folds in her face which can cause irritation and should be clean regularly.

Her ears also had problems and she was plagued with yeast and bacterial infections. A radiograph confirmed that both her ear canals had narrowed due to ongoing chronic infections.

Head Vet, Dr Ursula Goetz, added, “With infections this chronic, surgery would often be required to completely remove the ear canals but, luckily for Elsa, we were able to control the infections by thorough cleaning twice a day.

“This reduced the inflammation allowing the ear canals to open up and meant Elsa didn’t have to undergo another invasive surgery. At present both ears look healthy, but they will need regular cleaning for the rest of her life to ensure infection doesn’t return.”

On top of all that, poor Elsa has ongoing dental problems because her teeth are misplaced and squashed – a typical issue with Frenchies due to their short muzzles.

As soon as she had received the medical treatment she needed, Elsa was ready for adoption and quickly found a new home.

Mayhew’s Dog Adoption Officer, Lisa Guiney, said, “Most of these dogs will require ongoing medical treatment throughout their lives such as cleaning the teeth and skin folds every day, weekly medicated baths and regular ear cleaning. All of which can be costly, a lot of effort and very time consuming.

“When it comes to exercise, rather than going for one long off-lead walk every day, it is safer to take three shorter off-lead walks as brachycephalic breeds tire easily and find it difficult to breathe due to their short muzzles. It is important that an owner understands the needs of their pet, monitors their breathing while exercising and takes extra precautions to ensure they don’t overdo it.

“Please think carefully whether you will be able to care for a brachycephalic pet before getting one, both financially and timewise. Getting a pet is always a big responsibility but these breeds need extra care and you must be fully prepared.”