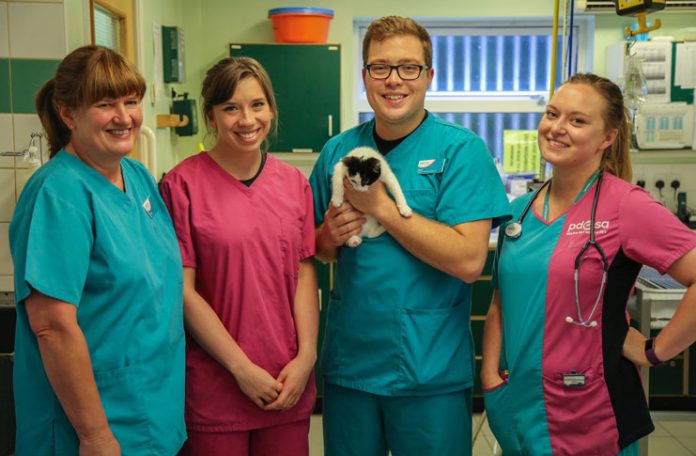 We’re a nation of animal lovers but what happens when your pet falls ill and you can’t afford the expensive vet bill?

A brand new series will show the realities of day-to-day life in two of UK’s busiest pet hospitals, run by veterinary charity PDSA.

Cameras spent six months inside PDSA’s two Liverpool pet hospitals – Kirkdale and Huyton – to create the series called The People’s Vet. The charity’s vet teams will deal with hundreds of cases every single day – from routine check-ups to life-and-death emergencies.

Series Executive Producer Sarah Murch said, “The PDSA has, for one hundred years, treated British pets when their owners can’t afford private vet treatment. We deliberately chose two of their busiest city hospitals to see the day to day realities faced by their veterinary teams, working to treat sick pets and helping their owners. It was very moving to see the importance of pets in the clients’ lives, and their gratitude for the treatment they received.”

The charity runs 48 hospitals in cities and towns throughout the UK and provides low-cost and free veterinary treatment for pets of eligible clients, most of whom are on means-tested benefits. The charity also promotes preventive pet health and educates owners on pet care matters.

One of the vets featured in the show is Matt Forshaw, senior vet at PDSA’s Huyton hospital. He said, “The series gives us a great opportunity to show the wider world what an important job we do at PDSA. We are dealing with some of the country’s most vulnerable pets and owners. The sheer number and variety of cases we see is amazing, so there’s no shortage of great stories for a programme maker.”

In the first episode, Head Vet Stephen has doggie dental duties to perform at Kirkdale and we’ll meet Elvis the cat, who has a nasty open wound on his back following a fight with a fox. Down the road at Huyton, Shadow the Staffie is rushed in suffering with seizures and an unusual animal is found on the streets of Liverpool, but a new home must be found.

The People’s Vet, produced for Channel 4 by Blakeway North, will start this Saturday (4 August) at 4.30pm.