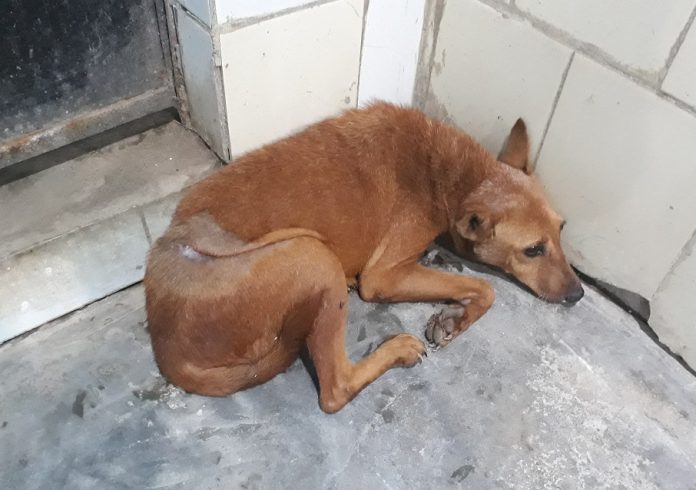 A severely malnourished dog, who had metal wire tied around her middle, is now on the road to recovery thanks to Mayhew International’s sponsored Vet team in Ranchi, northern India.

The stray dog, named Lilly, was first discovered by the team’s dog catchers, who were out looking for strays as part of their Trap, Neuter, Release programme. They thought she was just another dog trying to survive on the streets in the city, something that is all too common in Ranchi. However, as the team approached her, they realised there was something very wrong.

Head Vet of Mayhew International’s sponsored Vet team in Ranchi, Dr Ajoy, said: “Lilly was very scared and in a lot of pain. When the dog catchers finally managed to get near her, they could see what looked like a deep gash all the way round her middle.

“They were horrified to discover that someone had tied a metal wire around her very tightly. It had clearly been there for some time as it was deeply embedded into her flesh. I don’t know how she had managed to survive with such a terrible injury, not to mention how she had been able to endure the agony.”

The wire seemed almost to have cut her in two, but the dog catchers were able to carefully transport her back to the clinic where the Vet team were waiting for her. Head Vet, Dr Ajoy, said: “Amazingly, the infection seemed limited and there were no maggots present. She was anaesthetised and I began to slowly remove the wire with cutters. It took some time as the wire was embedded so deeply and I didn’t want to damage anything else. I then dressed the wound and started her on a course of antibiotics to help fight infection.”

Lilly was also severely malnourished and weighed only 15kg; it would not have been easy for her to find food with her injury. The healthy weight of a dog of her size is about 25kg, so you can imagine how weak and hungry she must have felt.

Head Vet, Dr Ajoy, added: “She’s been in our care for just over a month now, during which we have been giving her regular meals and letting her get the rest she needs. Her condition is starting to improve and she has gained an encouraging 5kg so far. She is still very frightened, but she seems to feel safe here, responding well to her treatment and slowly starting to recover.”

Once Lilly is stronger and her wounds have healed, she will be neutered and vaccinated and then released back into the community where she will be monitored by the dog-loving local residents.

Head Vet, Dr Ajoy, said: “I find it impossible to believe that a human could do something so cruel and inhumane to another living being. By tying the wire around her middle, the culprit was condemning poor Lilly to a life of pain and suffering and if we hadn’t found her when we did, she would have died a slow, painful death alone on the streets.

“Here in Ranchi community dogs that are neutered and vaccinated can live safely side by side with the locals, but there are still many in need of our help. We are working hard to educate more of the local community about animal welfare and change their behaviour towards animals to treat them with care and respect. If it wasn’t for Mayhew International’s sponsorship of our education programme and my veterinary team we wouldn’t be able to help hundreds of animals like Lilly.”

To find out more about Mayhew International and how you can help, go to www.themayhew.org/donate or call 020 8962 8000.