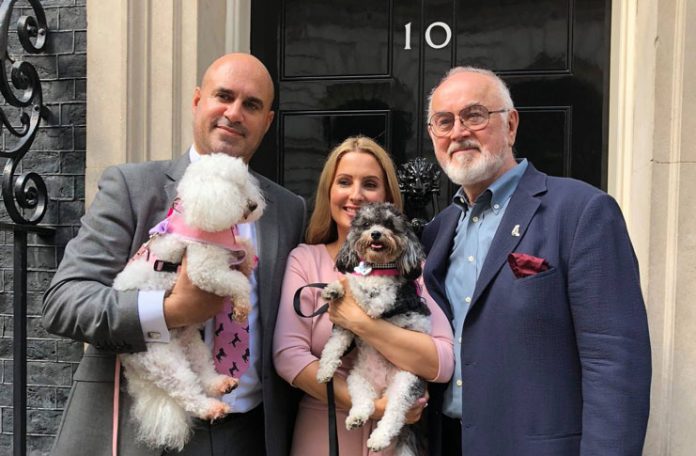 Today (22 August) the Government has announced that it supports the Lucy’s Law campaign, which asks for an outright ban on third party puppy and kitten sales, and has published a consultation on the plans.

It’s a victory for campaigners who have worked tirelessly to bring awareness to this huge animal welfare issue.

A ban on third party sellers, which includes pet shops and online dealers, will hopefully close an avenue used by unscrupulous breeders and puppy farmers to sell pets. Many of these animals are often sick and weak and their mothers are kept in horrendous conditions. The ban will mean anyone wishing to adopt or buy a puppy or kitten must either deal directly with the breeder or with an animal rehoming centre.

The campaign is named after Lucy, a Cavalier King Charles who was rescued from a puppy farm where she was used for breeding. Although Lucy is no longer with us, her owner Lisa Garner, and campaign groups such as Pup Aid and CARIAD have continued her legacy.

In his speech at Number 10 Downing Street yesterday, Environment Secretary Michael Gove said, “Today we are making a significant announcement in the history of animal welfare and the protection of companion animals and pets.

“From tomorrow we will absolutely confirm that we will be consulting on how we implement Lucy’s Law.

“We will be making sure that the third party sale of pets, of kittens and of puppies, ends.

“Far too many of the pets that people, with the best will in the world, bring into their homes we know have been brought up in squalid circumstances. In circumstances of pain and suffering and misery which should never be inflicted on any living thing.

“That’s why, by making it absolutely clear that if you’re going to buy a puppy or kitten in the future, that you need to be absolutely certain that you can buy it from an ethical, regulated breeder. Who can show you the parent of that puppy or kitten.”

He also praised the work of the campaigners, particularly campaign founder, vet Marc Abraham and said, “Mark’s pioneering work as a vet, as someone who puts animal welfare at the heart of everything that he does, has been inspirational.”

In his own speech outside number 10, Marc thanked everyone involved the campaign. “I can’t thank everyone enough. Everyone here has played a part in getting to here and being in earshot of that most incredible speech we’ve heard.

In a statement, RSPCA deputy chief executive Chris Wainwright said, “We’re delighted that the UK Government has committed to a programme of reforms to animal welfare law, including this announcement on how to bring in the ban on third-party sales of puppies and kittens in England.

“Our work to tackle the puppy trade means we’ve seen first-hand the devastating impact that unscrupulous breeders and third-party dealers can have on dogs and people. It’s disgusting that these sellers can make so much money from the misery of animals and prospective owners.

“We welcome Environment Secretary Michael Gove’s announcement to launch a consultation on how to ban third-party sales with the aim of ensuring buyers buy directly from responsible breeders or rehome from rescue centres. We believe that all puppies and kittens should be born and reared in a suitable environment, with their mother, and should be sold directly from their place of birth.

“We hope this move – along with the new enhanced licensing regime and proper enforcement – will offer better protection to puppies and their parents and reduce the number of families duped by rogue dealers in this illegal multi-million-pound industry.”

Mayhew’s CEO, Caroline Yates, who attended the garden reception yesterday, said, “Mayhew is very pleased to hear that there will be a ban on the sale of puppies and kittens by pet shops and other third party dealers – a great step forward in improving animal welfare standards.

“We are delighted the government has taken on board the evidence supplied by Mayhew and other welfare organisations on this important issue that we have all been very concerned about. We purport to be a nation of animal lovers. As such bringing a pup or kitten into a family home should never be a purely commercial transaction, where profit is the primary purpose, and where no thought is given for the welfare of defenceless animals that feel pain and distress as we do.

“The ban shines a light on the suffering, both physical and psychological, that the animals people see in pet shops, or respond to online, have likely experienced though poor breeding practices and conditions. Mayhew is a member of The Association of Dogs and Cats Homes which has developed minimum standards that rehoming centres should be held to, and there are ongoing efforts to clamp down on unscrupulous online sellers with a cross-charity forum. These initiatives, together with tighter licensing of people breeding and selling dogs, must continue to have government support, be effectively regulated and enforced if we are to truly end harmful puppy and kitten breeding practices.

“This ban will help prevent owners continuously being misled into buying often sickly or underage animals from third party dealers, who have no interest in their welfare. It will bring us closer to putting an end to animal suffering, unnecessary deaths and the all too frequent relinquishment to shelters of these poor animals. With this legislative support, animal welfare organisations like Mayhew will truly be able to help animals and owners in our community.

“We look forward to working with the government through the consultation to identify how to implement the ban, which, if done right and in partnership with animal welfare organisations, will make a difference to the lives of thousands of animals.”

The consultation has now been launched and seeks the views of the public on plans to introduce the ban. The consultation will be open until 11:45pm on 19 September 2018.