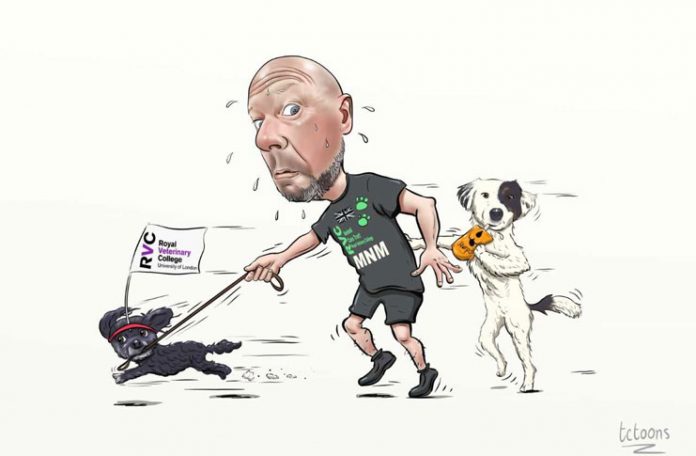 If it wasn’t for the College’s clinicians, Fleur would not have been here today and her owner Andrew Morris has been looking for a way to say thank you ever since.

Three years ago, Fleur’s life was changed forever. Found on the streets of Bucharest, Romania, she was forced to endure a botched spay job in a dog shelter. Valgrays Border Collie Rescue stepped in to organise for an operation to fix the damage and she found a new home with UK couple Andrew and Wendy.

But the fresh start her rescuers had envisaged quickly faded when three weeks later Fleur collapsed and a local vet discovered she had rotten, dead intestines and was dying of sepsis.

Despite the minimal chance of survival, Andrew and Wendy refused to give up. They took Fleur to the Royal Veterinary College’s hospital in Potters Bar where a specialist agreed to treat her. A social media campaign raised the £10,000 needed for treatment within a day and after a five-hour operation involving three vets and a fortnight of intensive care, Fleur returned home.

She has since made a full recovery and is now a social media star. She was even named a finalist in Scruffts 2017 in the Best Rescue category.

Andrew is hoping to raise £999 for ACT when he takes on the 13-mile race on 14th October. Speaking about his decision to participate, Andrew said, “Finding a way to repay the RVC has been a priority, so when I saw the advertisement to run the Royal Parks Half-Marathon in aid of the Animal Care Trust, I thought this was surely my opportunity. I am looking forward to promoting the fantastic work of the RVC and raising funds in order to hopefully contribute to many more lives being saved. That thought alone will be enough to smash out 13 miles.”

Nadja Hale, Head of Fundraising for the ACT, said, “It’s so imperative to our charity that we have supporters such as Andrew running challenge events for us, it raises awareness and vital funds for our incredible work.”

The charity exists to support the RVC’s wide range of clinical, research and educational activities to improve animal health and care.

If you want to help Andrew reach his target, visit his fundraising page.