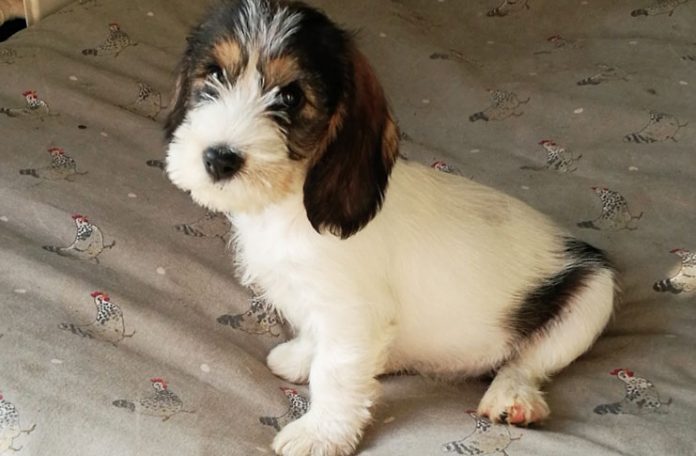 A 10-week-old puppy has been saved from blindness thanks to Suffolk veterinary charity, the Animal Health Trust (AHT).

As the charity celebrates its Cures4Paws week – a national fundraising initiative for research into canine diseases – new statistics demonstrate the effect a simple DNA test is having on the health of one dog breed in particular.

The AHT launched its DNA test for primary open angle glaucoma (POAG), a painful condition which eventually leads to blindness in the Petit Basset Griffon Vendeen, in 2015. At the time, one in 20 Petit Bassett Griffon Vendeen puppies were believed to be affected by the disease.

Three years later, through responsible breeders using the DNA test, there have been no affected puppies in the UK reported to The Kennel Club.

The results mean that 10-week-old Clover, from Scotland, and hundreds of puppies like her, will never develop the blinding disease. It also shows how DNA testing can lead to the immediate disappearance of a recessive disease.

Viv Phillips, a breeder who is seeing the benefits first-hand, says, “As the breeder who first announced I had a dog affected by POAG I was delighted to work with the AHT and Prof Peter Bedford for 18 years in the research into this disease. I know how tough it is to not be able to avoid your dog going blind at a relatively young age. When the AHT discovered the DNA mutation in November 2014 which was subsequently launched at Crufts in 2015 it was the most wonderful result.

“I tested the PBGVs I still had, including their older parents, and was able to ascertain that puppies I had bred were either at no risk of going blind or sadly carried the gene and therefore treatment could be started to prolong their eyesight. Since this time I have bred 12 puppies and I am delighted that I know they will not be affected as a result of using the DNA test.

“Worldwide approximately 1800 Petit Basset Griffon Vendeen have been tested, and in the UK no puppies have been recorded as affected in the last three years. It is not a numerically large breed and if we can continue to spread the word worldwide and convince breeders to test their breeding stock, we can – with the help of the AHT – look forward to eliminating this awful disease completely.”

Dr Cathryn Mellersh, Head of Canine Genetics at the AHT, says, “Years of work went into developing this DNA test which makes it even more rewarding to see it used so well to stop these lovely dogs from going blind. Glaucoma is a very debilitating and painful disease and some dogs have to their eyes removed as a result.

“We are studying glaucoma, and many other blinding diseases, in lots of dog breeds. These mutations can also affect cross bred as well as purebred dogs, so as the popularity of cross bred dogs continues to rise, DNA health testing is more important than ever to make sure you’re breeding, or buying, puppies that are going to have the very best start in life. Great things can be achieved through genetic research and as humans suffer many of the same diseases as dogs, there is always the possibility that our research is going to help human medicine as well.  Unfortunately research is expensive and we always need more funding to be able to continue to maintain and expand our research of inherited diseases, including more complex diseases, such as epilepsy.”

Throughout Cures4Paws week, the AHT aims to raise awareness of the work it is doing to combat cancer, epilepsy and blindness which affect thousands of dogs across the UK everyday. Find out more at www.aht.org.uk/cures4paws