Canine campaigners from all over the UK are barking out to demand a ‘Wooferendum’.

The self-funded campaign has received support from volunteers as well as dogs and humans across country as it leads up to a huge march through central London, to Parliament, to call for a People’s Vote on Brexit. A ‘Wooferendum PETition’ has also been signed by dogs, leading public figures and celebrities and will be delivered to Downing Street, at the march, on Sunday 7 October 2018.

The campaign has also taken to social media as photos of dogs posing with ‘Stop Brexit #Wooferendum’ signs have been appearing in cities around the UK and online.

Cats have also been seen joining forces to stop Brexit…

The Wooferendum campaign highlights potential effects on animal welfare as well as public health, as a recent report from the Royal College of Veterinary Surgeons warns that we may see a shortage in qualified labour in veterinary surgeries across Britain. The report recognises that non-UK EU vets make up around 25% of the overall number of vets in the UK and Brexit could result in a major barrier of EU vets working in Britain.

A short film aims to inspire people and pets to get involved with the movement.  ‘The Wooferendum Is Coming,’ a one-minute film featuring dogs taking the lead on the issue, has had over 120K views on Facebook.

“Dogs were never consulted about Brexit,” says seven-year-old terrier Archie, one of the ‘spokes-dogs’ for the campaign. “Millions of us are sad and worried. Brexit is turning into a dog’s dinner and people deserve a say. We are worried for our future, and that of our two-legged friends. That’s why we are barking out. If your best friend was in trouble, what would you do?” 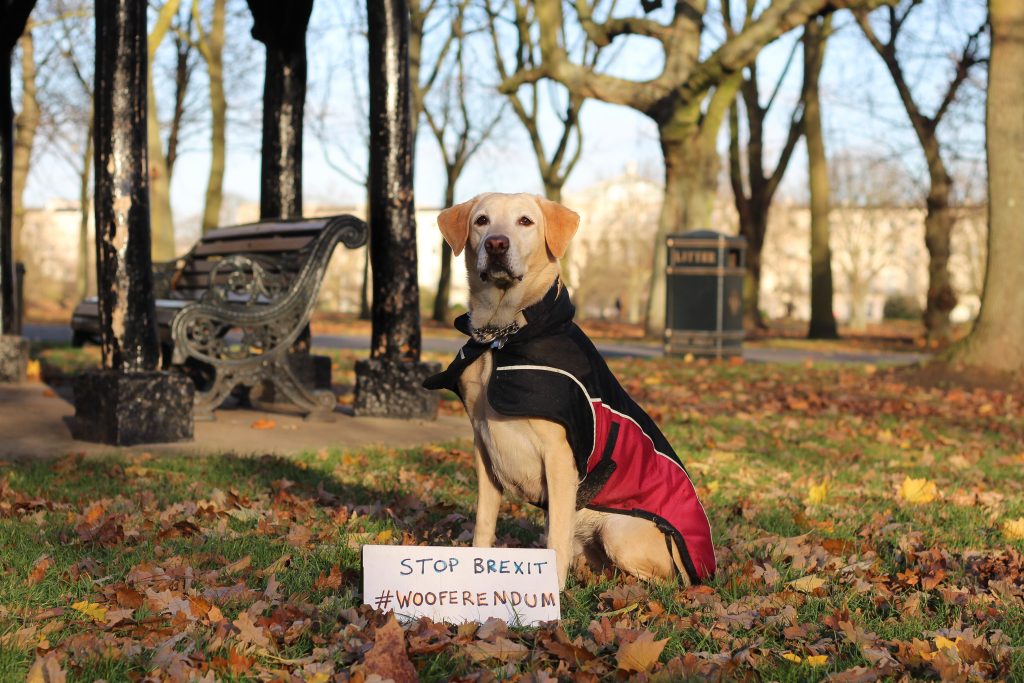 “The enthusiasm for Wooferendum has been incredible,” says its founder, Daniel Elkan, who has been canvassing the opinions of canines and their owners for months. “People and dogs jump at the chance to express their feelings about Brexit, which is a tough topic, in a more friendly, engaging way. The movement is growing and the Wooferendum March on Sunday 7th October it will be a fantastic day out.  We want to create the biggest bark in history – by the dogs, for the people. The campaign might seem barking mad – but it’s not as mad as Brexit.”