A nine-year-old Lurcher has learnt to walk again after surviving a four-foot fall that left him with spinal trauma, whilst on a walk this summer. Thanks to the help of the hydrotherapy and neurology teams at veterinary referral hospital Pride Veterinary Centre in Derby, Ralph is back on his feet and is looking forward to living a happy, active life once again with owner Stella Browne.

“Everyone at Pride has been wonderful – to me as well as for the care they’ve given to Ralph. I’m so happy to see him back on his feet and happy again”

The accident happened earlier this year when Ralph and Stella were on a walk around Alvaston Castle. Ralph had been running to and from Stella during the walk when she realised Ralph had been away from her side longer than usual. Whilst busy playing, Ralph hadn’t noticed a steep drop next to him and he fell four-feet below into a dried-up brook that was thick with mud.

The park’s ranger found Ralph when his own dog alerted him to something stuck in the brook. All he could see was a nose sticking out above the mud and a worried owner searching for her dog close by. They gathered as many nearby walkers as they could to help free Ralph and lift him to safety. Once he was back on dry land, it was clear a shaken Ralph could no longer walk, as well as being in a lot of pain.

The Park Ranger rushed Stella and Ralph to Pride Veterinary Centre in Derby for emergency veterinary treatment, following the advice from Ralph’s usual vet. Following an initial consultation by Pride’s neurology team and an MRI scan, Ralph was found with a slipped disk in his back which had severely bruised his spine, explaining why he wouldn’t weight-bear on either of his hind legs.

Kimberley Sheerin, Small Animal Hydrotherapist at Pride Veterinary Centre who treated Ralph, explains, “When we see dogs with slipped discs surgery isn’t always an option, so intense rehabilitation is needed. We started Ralph on a course of hydrotherapy in our water treadmill, as the water could weight-bear for him until he was able to do this for himself. He was quite nervous during his first few sessions, but with some gentle encouragement from me, Stella and some tasty sausages, he soon learned it was nothing to be scared of!”

“At first I had to be in the treadmill with him and place his feet for him as he couldn’t do this for himself, but within the first four days of treatment we noticed his right hind leg move for the first time since the fall. A week later, his left hind leg also moved. Gradually Ralph re-learnt how to walk and six months after his accident I’m delighted to say he walked out of Pride having completed his course of rehabilitation – something we weren’t sure would be possible when we first saw him.”

Owner Stella Browne has had Ralph since 2014, after she saw him at a local rescue centre and couldn’t leave without him. She says, “When I first went into my rescue centre I had thought I wanted a collie, or collie cross. But then I saw this beautiful golden lurcher cross with big brown eyes, and was bowled over when I saw his name – Ralph – as that was also my father’s name!

“My decision was made, and we’ve had five very happy years together so far, so you can imagine how worrying it was to see him unable to walk following his fall. Everyone at Pride has been wonderful – to me as well as for the care they’ve given to Ralph. I’m so happy to see him back on his feet and happy again – he regularly chases Mr Fox out of our garden, so I know he’s back to his old self again!”

Kimberley concludes, “Ralph (and Stella) met an array of staff during his time with us, including receptionists, kennel assistants, vets, nurses, the whole hydrotherapy team and even some final year students from the University of Nottingham who undertook their placement at Pride Veterinary Centre. To celebrate his last session we threw a little tea party in the office so all the staff who helped Ralph could see him and Stella one last time. We will miss them both, but well done Ralph!” 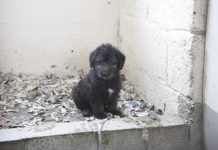 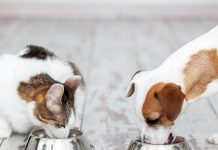 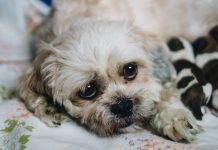