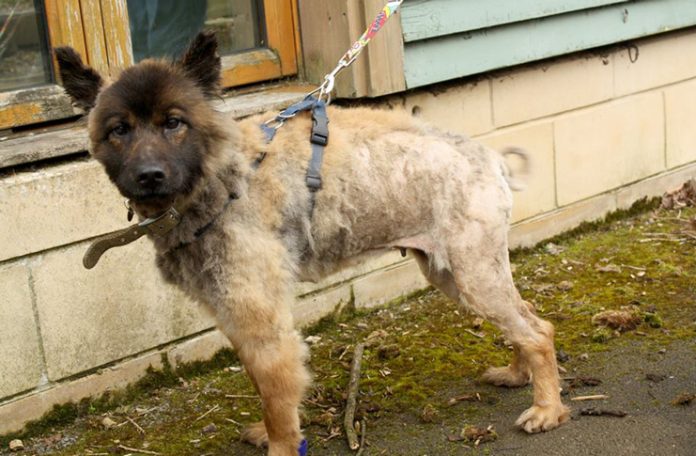 If you looked into Hobbit’s bright eyes and stroked her glossy coat, you would have never thought that just last year she was living in such disgusting conditions.

The two-year-old, along with 21 other matted, filthy Eurasian dogs, were rescued from a home on the border of Hampshire and Wiltshire by RSPCA officers in March, after complaints were made about the conditions they were living in.

RSPCA inspector Miranda Albison, who led the investigation, said, “The dogs were living in makeshift kennels and runs in the garden and inside the house.

“There were lots of dogs crammed into rooms and pens, they were all absolutely filthy with matted coats.

“The conditions were absolutely hellish. I can’t begin to describe how awful the smell was.”

Three of the dogs, including Hobbit, went to Bath Cats & Dogs Home, an RSPCA branch, to receive treatment.

Head of fundraising and communications, Rachel Jones, said, “When Hobbit arrived she was matted, covered in faeces and underweight with a body score of just two out of five.

“We tried to brush and clip her coat but, on our first attempt she got so stressed that we had to stop.

“We eventually had to sedate her and shave a lot of her coat as it was in such a terrible state.”

In June, Anna and Mark Abram from Chippenham, Wiltshire, rehomed her. Anna said, “Hobbit is so adorable and loving, she has learned so much in the few months we have had her.

“She has lots of doggie and human friends now, everywhere we go people want to take pictures and ask about her!

“During the holidays we went out for lots of day trips, she loves the beach and will go paddling in the water. We also took her to a festival where there was a dog competition – and she won first prize!”

All the dogs seized from the property have now been rehomed. Three people were investigated over the welfare conditions of the dogs with no further action taken against two and one was given a caution.