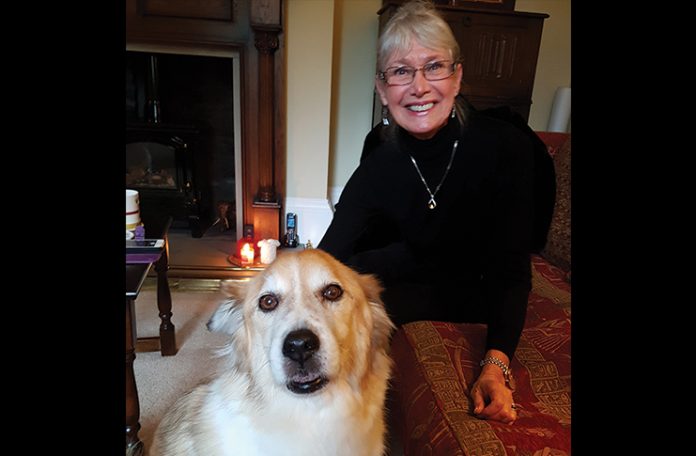 Ursu, the feral Romanian stray whose inspiring story is retold in URSU – Never Give up on a dog, has gone on to win the heart of TV personality and former newsreader Jan Leeming.

Jan, herself an animal lover and owner of a Battersea adult rescue Papillon named René, not only bought several copies of the book, but took one step further and met Ursu at his home in West Yorkshire in January.

Ursu survived for about two years on the streets of Bucharest before she was caught and flung into one of Romania’s most notorious kill shelters. Miraculously, Ursu survived three years before being transferred to another shelter, but he shunned humans and was thought to be “too mentally damaged” to be rehomed. After a lot of persuading, however, Sarah and her husband were eventually given the chance to try and help Ursu and he travelled to their home in January 2015.

Ursu – Never Give up on a Dog, which featured in our Dogs Monthly December issue, tracks the Ursu’s first two years with the Napiers.

Jan Leeming, whose professional career as a supporter of animal welfare has included the reality TV show, Safari School, says, “Ursu was a delight to meet. Happy, friendly, balanced and very accepting of René entering his personal space. The patience that Sarah and her husband have shown is remarkable. What is even more astounding is how they managed to reach through to Ursu and turn him around from a feral frightened seven-year-old stray into the placid and relaxed dog that he is today. It’s a fantastic read that I couldn’t put down.”

The book has been written to raise awareness of the plight of stray dogs and to help raise funds and inspire adoptions. It has also been publically praised by actors Thelma Barlow and Peter Egan.

The kill shelters of Romania often use brutal practices such as culling dogs in inhumane ways including clubbing, poisoning, starving, freezing them to death and burning them alive. The strays are caught using metal lassos that tighten round the neck and some have their legs trussed at painful angles. Ursu witnessed all of this and experienced much of it and chose to shut down from humans.

“We were his only enquiry in all his life,” explains Sarah, “and the more I learned of his story the more I felt such a stoic dog should be given his chance. But I’m not a dog psychologist and had to rely on an innate understanding backed up by much research to try and work with him. There was no way my husband and I could take him to dog training. He arrived biting, bucking and terrified and hadn’t walked as such for up to four years. He wouldn’t take a collar or a lead. He was terrified of just about everything. We were beginning way back from the usual start line.”

Jan adds, “It just goes to show that there isn’t such a thing as a bad dog and that a canine’s intelligence should never be underestimated.  It’s all about the training and the environment in which they are living. Ursu is living proof.”

“It was a complete surprise and pleasure to have Jan join us,” says Sarah. “Such a household name. Ursu took to Jan instantly and it was such a fillip to have someone in the public eye recognise both Ursu and his book.”