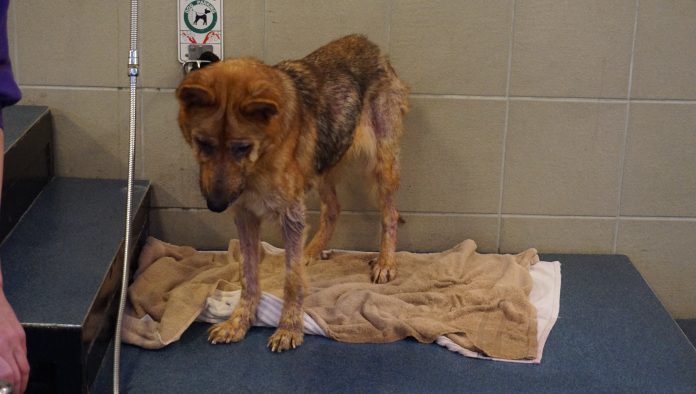 Yesterday (Tuesday 26 March) animal welfare charity, Mayhew, launched an appeal to raise awareness and funds for the recovery of a neglected German Shepherd that arrived at the charity on the verge of death.

Six-year-old Tess was shaking, scared and starving when she arrived at Mayhew earlier this year. Weighing just 19kg, Tess could barely stand. The normal weight for an adult female German Shepherd is in the region of 25-35 kg, but Tess was emaciated and well below the recommended weight.

Her body was covered in painful sores and several large patches of fur were missing – including her tail, which was almost stripped bare. Described as being drained of emotion and life by Mayhew’s staff, it was clear the race was on to stop her suffering.

Veterinary and Kennels teams sprang into action, taking the immediate steps to relieve her of pain. Swab tests were performed to establish if there were any sinister underlying causes for the inflamed skin and fur loss. Tess was then given medicated baths to soothe her sores, and had a warm kennel with a sofa and soft blankets to minimise her discomfort.

Being so desperately thin and malnourished, Tess was put on a special diet. She was fed six small meals a day to prevent her stomach being overwhelmed, and to build up her strength gradually.

Tess’s treatment began with two medicated baths per week, however it soon became clear that these were causing her additional stress. So in the interest of her welfare, the baths were reduced down to once per week.

After a few weeks Tess’s skin started to improve and her fur began to grow back. It was concluded that malnutrition was the was the most likely cause of Tess’s physical ailments, as tests revealed there was nothing medically alarming causing her condition. Tess’s specially designed diet also seemed to be working well for her – after seven weeks of eating ‘little and often’, she gradually put on more weight and now weighs a much healthier 26kg.

Although there is still a while to go before Tess is fully recovered, Mayhew’s teams are dedicated to helping her and are hopeful that she will continue to improve as they carefully monitor her progress. Every gram she gains and every patch of fur that grows back is a sign that she will survive the trauma she has been through.

It’s anticipated that Tess will be in the care of Mayhew for some time to come, despite her amazing progress and response to the teams’ care and attention so far. Mayhew has worked hard to gain Tess’s trust and build up her confidence, as she now engages in gentle play and daily walks.

Mayhew will continue to stay right by her side during the weeks and months ahead, with high hopes that she will be able to find herself a new loving home, when the time is right. Until then, you can help Mayhew provide these essential nutrients, surgical equipment, medical and rehabilitation treatments, for Tess and animals like her by donating.

Image and videos by Mayhew