Bichon Frise, Daisy, is a big hit with the residents of Penybryn Care Home, bringing joy especially to a young woman who is in the final stages of a degenerative brain condition.

Thirty-year-old Lizzie Bennett and her two brothers, Christopher, 37, and Jonathan, 32, all have the cruel hereditary illness, Huntingdon’s Disease, which has been described as Parkinson’s, Motor Neurone and Alzheimer’s all rolled into one.

Lizzie and Christopher are both residents at the care home at Pendine Park in Wrexham, which specialises in looking after people with neurological disorders and acquired brain injury. Brother Jonathan still lives independently but will need increasing levels of care as time wears on.

Playful pooch, Daisy, a 10-month old Bichon Frise is a much-loved guest that has been making visits to the residents, putting a smile on the face of Lizzie every time she scampers into the room. Owned by Pendine Park director Gill Hughes, Daisy spends every day at Penybryn while Gill works and enjoys hoping up onto Lizzie’s bed to spend some treasured time with her.

Lizzie’s mum, Kim James, from Llay, said, “I cared for Lizzie full-time until February 2018 when she moved into Penybryn. She is in the final stages of the disease now unfortunately and is now unable to swallow and is fed through a feeding peg in her abdomen. She can no longer move independently.

“It’s such a cruel disease. The condition is hereditary and their father carried the gene. It’s amazing to see how Daisy just lifts Lizzie’s spirits. She gets so excited when Daisy goes in her room. She will jump up on her bed and gently nibble her toes. It has Lizzie in fits of laughter, she just gets so excited.

“It just goes to show what Penybryn is like, its home from home in many respects. I visit Lizzie every day other than Thursday when my sister goes in. We are always made to feel welcome. Lizzie’s grandad, Tony Cross, who’s my dad, is a huge part of Lizzie’s life and calls most days to see her and Chris.  He is amazing.

“Every night I Facetime Lizzie to say night-night. Carers hold her iPad so she can see me. The thing is, as she is in the latter stages of the disease, she could so easily pass away during the night. In fact, just before Christmas Lizzie contracted sepsis and sent several weeks in the Mealor hospital. Three times we were called in as she wasn’t expected to survive the next few hours.

“But she fought and fought and eventually made it back to Penybryn. She lost so much weight though. We had a birthday party for her in January and Pendine put on a buffet and we had 32 family and friends come along. Both Lizzie and Christopher had a great time.”

Kim explained just how happy Lizzie is when she gets to spend time with Daisy. She said, “Her head can be down and she can be so miserable but as soon as Daisy is with her spirit is lifted and she’s obviously so much happier. It’s just amazing to see the difference that one little ball of fur can make to Lizzie.”

Daisy has also been a huge comfort to Gill Hughes, Pendine Park Care Organisation’s regulation and compliance manager and responsible individual, spends every day at Penybryn Neurological Centre and Care Home while Gill works away in her office.

She explained, “After my husband passed away I was advised to get a dog if only for company. My brother has a Bichon Frise and I thought it was the breed of dog that would suit me. Daisy started coming to work with me every day but she was never particularly happy just sitting in my office. So, I started dropping her off with Tracey Cuthill the manager of Penybryn and she quickly made it her second home.

“She’s now a firm favourite of residents, staff and relatives and spends most of the day following Tracey around Penybryn interacting with residents and relatives. It’s amazing to see the difference she can make to the mood of a resident; it’s obvious she brings such joy to so many people even those with severe disabilities such as Lizzie Bennett who suffers from Huntington’s disease. Lizzie adores her.

She added, “The thing is Daisy seems to have the ability to sense when someone’s feeling down. She’s not a dog that likes to be stroked or petted but she seems to have this ability to give empathy. If I’m feeling down she will come and snuggle up to me and it’s the same with residents. I think relatives of residents can see the positive effect Daisy has on everyone she comes into contact with. 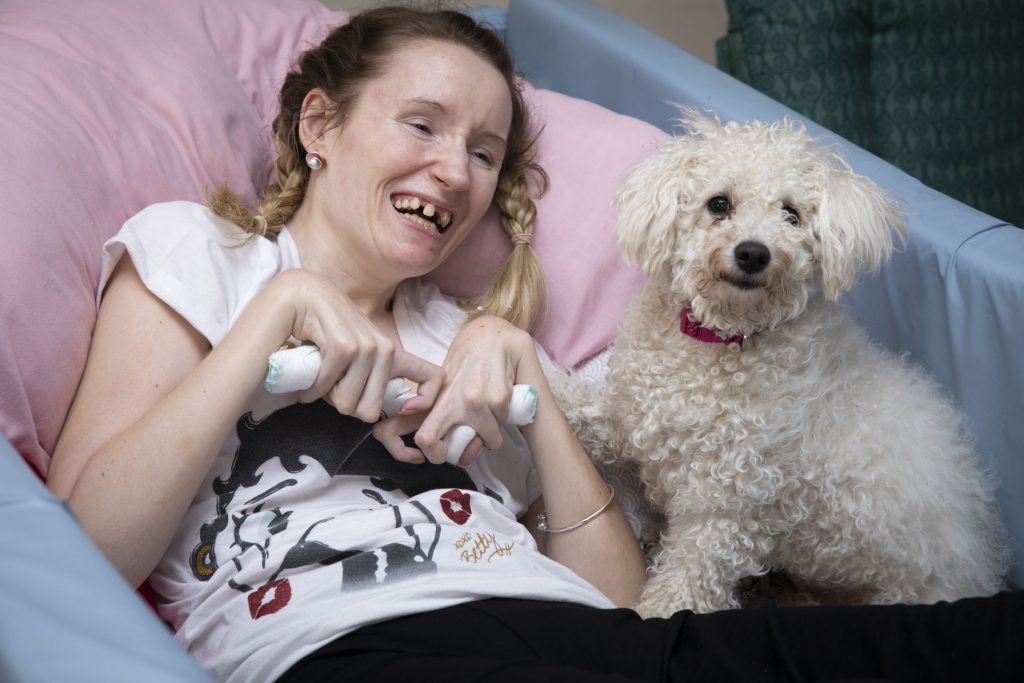 “Everyone at Pendine Park from Mario and Gill Kreft, the proprietors, to care practitioners, the maintenance team and gardeners have taken Daisy to their hearts.”

Penybryn manager Tracey Cuthill said, “It’s remarkable the difference Daisy can make to the lives of residents. They just adore her and relatives do too. Lizzie can be really down and miserable but Daisy making a fuss of her and tickling her feet just has her laughing. Huntington’s is a terrible disease and although she can no longer move independently, speak or even swallow she is still fully aware of what is going on around her and contact with Daisy just has a massive effect on her well-being.” 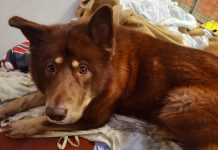