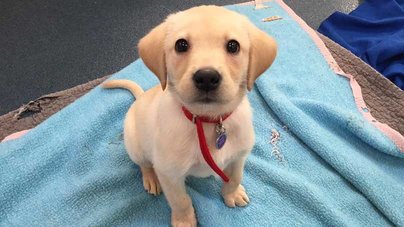 A charity is warning potential owners of the hidden cost of buying a pet from a third party seller after a sick puppy, bought through an internet advert, was handed over to them.

The young couple said they had found the adorable Labrador puppy advertised on Gumtree, and thought their dreams of owning a dog had finally come true.

Buddy was on sale for £400 and was listed as being vaccinated, microchipped and in good health. Believing the ad, the couple travelled to the address given by the seller but were left ‘shocked’ by what they saw.

The 10 week-old puppy was being kept in a tiny rabbit hutch with one other puppy. From the start, this ‘healthy’ pup appeared lethargic and quiet, and it was clear to the couple that he had not been properly cared for.

Despite their concerns, the couple brought Buddy home but on his first night in his new home, the pup passed a large amount of watery, milky-coloured diarrhoea, and was obviously in considerable distress.

Realising something very wrong the couple brought the poorly pup to the Mayhew the next say and agreed to sign him over to the charity.

Buddy was placed in medical isolation while vets conducted their investigation. Test results showed he was suffering from a gastrointestinal infection or parasite, and he was prescribed with a full course of antibiotics and worming treatment, along with cage rest.

Vets also discovered that Buddy had been given out-of-date vaccinations and that whilst he was indeed microchipped, he had not been registered.

Deceptive breeders and sellers advertise pets like Buddy on sites like Gumtree every single day, but campaigners hope to see a huge decline in this with the institution of Lucy’s Law expected soon. The law puts a ban on all third party puppy sales so owners can only buy direct from the breeder or rescue.

In the meantime, the Mayhew is urging all prospective pet owners to report any suspicious animal advertisements to their local authorities and to visit a registered rehoming shelter to adopt a pet.

Thankfully, Buddy did receive the help he needed following his ordeal. He is now a completely different dog according to the charity. After being neutered and receiving a second round of vaccinations, Buddy soon found a suitable home.