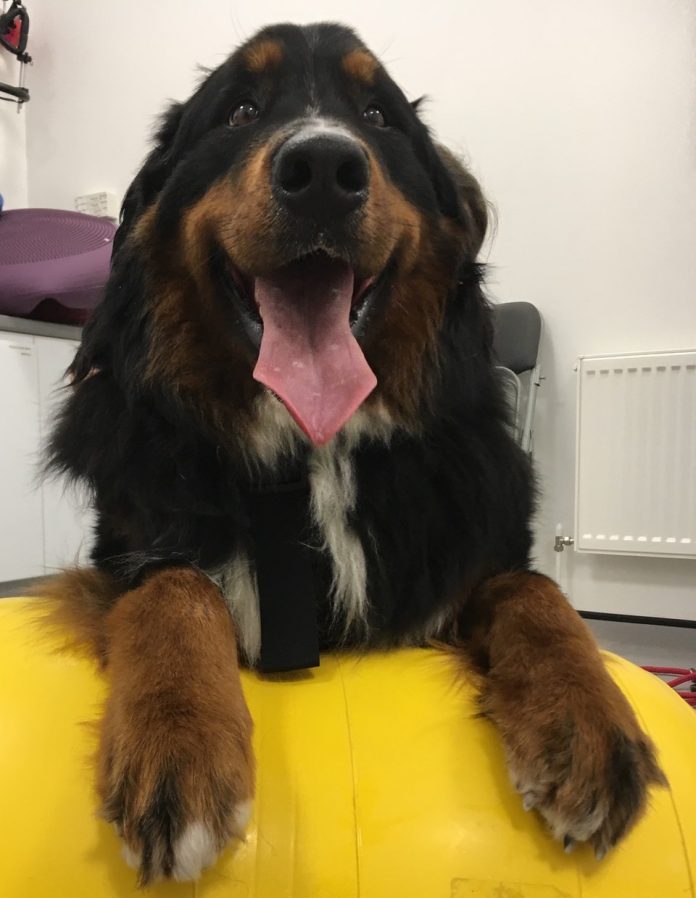 Owners had to carry their three-year-old Bernese Mountain Dog to a local vets after she suddenly became paralysed on a walk and couldn’t move her legs. Thanks to the Neurology and Neurosurgery department at Davies Veterinary Specialists (Davies), the family pet was able to walk out unaided just two weeks later.

Rahni was rushed into a local veterinary practice by her owners after suffering sudden onset paralysis. She was immediately referred as an emergency patient to Alex Forward, Neurology Specialist at Davies in Hertfordshire, for investigations.

“Her neurological examination was consistent with a spinal cord injury in the lower part of her neck, preventing her from being able to walk for herself,” explains Alex.

“An emergency MRI scan revealed a change to her spinal cord most consistent with a fibrocartilaginous embolism (FCE). This occurs after a blood vessel becomes blocked and focally deprives the spinal cord of oxygen for a short period of time. The blockage is caused by fibrocartilaginous material thought to come from an intervertebral disc.”

FCE is a non-surgical condition, unlike an intervertebral disc extrusion (slipped disc) which often requires surgical decompression. Typically, FCE affects one side of the body more than the other and in Rahni’s case it was her left side, where her paw placement was absent and prevented her from being able to use her front leg at all.

Rahni stayed at Davies just over two weeks for intensive specialised nursing, physiotherapy and hydrotherapy at the practice’s Therapy and Fitness Centre, with Alex monitoring progress. During her rehabilitation, the team focused treatment on Rahni’s left side – encouraging her to use the affected front leg as much as possible to ensure she would eventually be able to walk by herself again.

Sarah Conley, chartered physiotherapist said, “Rahni had physiotherapy sessions one to two times a day, working through a range of static and dynamic activities to optimise her independent function and control. She also received a range of manual treatments to maintain comfort during her recovery. Initially she wasn’t very keen on the underwater treadmill but with her favourite pink dinosaur toy, she soon became happier in the water and performed her daily hydrotherapy sessions well.”

Rahni steadily improved and was able to walk to her owner’s car unaided when she was discharged just over two weeks later.

“Our team of chartered physiotherapists and hydrotherapists continue to see Rahni every two or three weeks to improve her mobility,” said Alex. “Her long-term prognosis is good and we fully expect her to continue to improve and walk well in the future.”

To find out more about Davies and their multi-disciplinary approach to patient care visit: www.vetspecialists.co.uk