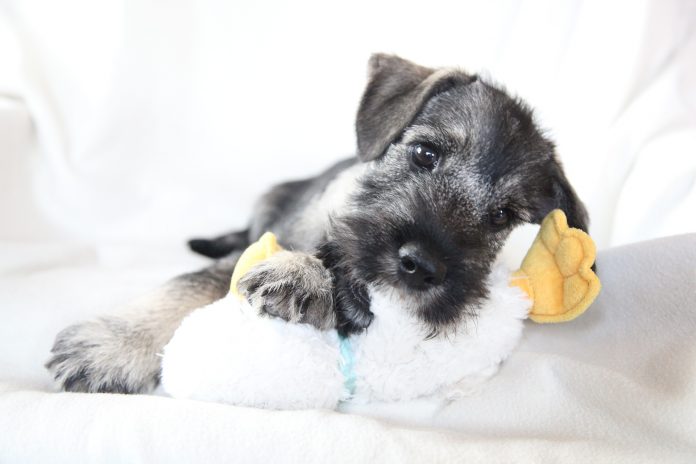 A DNA test has been launched by the Animal Health Trust to eradicate a blinding condition which has been identified in Giant Schnauzers.

Previously unrecognised within Giant Schnauzers, progressive retinal atrophy (PRA), an inherited retinal disease which leads to blindness, has no treatment and is well documented in more than 100 breeds of dogs. A dog suffering with PRA may begin to lose its vision in low light at night, have problems seeing obstacles or finding its way around in familiar surroundings. Over a period of months, or years, their visual impairment increases and unfortunately all dogs with PRA will eventually go blind.

Now, thanks to the work of vets and scientists at the Animal Health Trust (AHT) in Newmarket, a DNA test has been developed to get rid of the disease within the breed before it is able to take hold.

The Kennel Club Genetics Centre at the AHT received DNA samples from a litter of four year old Giant Schnauzers. Two of the seven littermates had previously been diagnosed with PRA. Follow up examinations of one additional dog in the litter and both parents at the AHT’s Small Animal Referral Centre revealed that in fact three of the seven littermates had PRA and both parents were unaffected by the disease.

This confirmed the presence of an autosomal recessive PRA, where an affected dog has to carry two copies of the PRA-causing variant in order to develop the disease. A genetic study was launched to identify the causal mutation, and results of this research show that mutation is rare within the breed, with approximately one in 35 dogs carrying the genetic mutation.

Rebekkah Hitti, Research Assistant and PhD Student within the Kennel Club Genetics Centre at the AHT, said, “As this condition in the Giant Schnauzer is quite rare we’re not expecting to find many affected dogs through DNA testing, but it is crucial to identify any carriers in order to prevent more puppies being born with this blinding condition, and to stop it becoming more widespread in future.

“We’ve had a good level of interest in this research so far from Schnauzer breeders and we’re confident that this breeding community is keen to get this mutation under control, and in time, eradicate it safely from their breed altogether.”

Rebekkah added, “Our study looked at DNA from a mixture of pepper and salt, and black Giant Schnauzers, and we identified carriers of both colour types. We also found dogs with carrier status in additional breeds of German origin, including Spitz and Dachshund varieties although the significance of this finding is unknown at present.”

“We would like to thank the Schnauzer Breed Clubs for their help and support and all the owners who participated in this study.”

The DNA test for PRA in Giant Schnauzer, costing £48, is now available from the AHT DNA Testing Service by visiting www.ahtdnatesting.co.uk