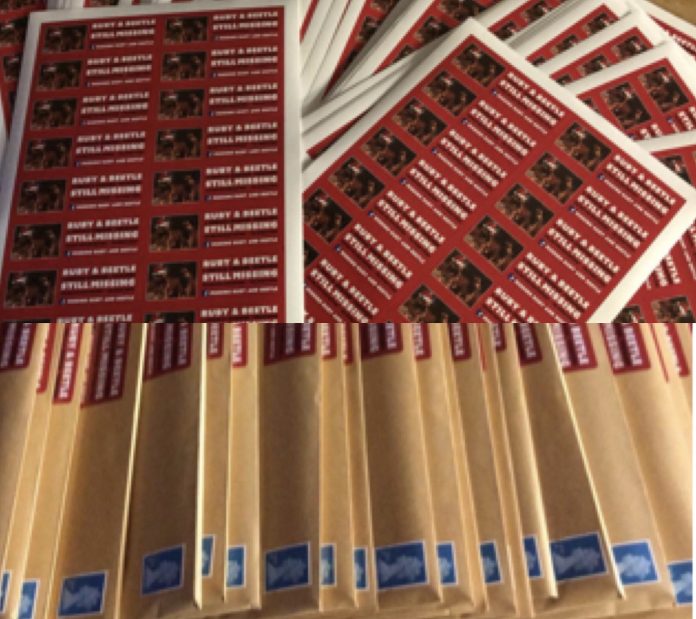 Supporters of a heartbroken owner, whose dogs have been missing since December 2018, are planning to send over 100,000 letters to help find them – a year after they were stolen.

“we are not interested in prosecution, we just want our two beautiful dogs returned safely so that our family can be complete again in time for Christmas”

Georgie Bell is the devastated owner of Ruby and Beetle, two Border Terriers who were stolen from the Lothian Estate on the Scottish Borders back in December 2018. She has vowed to never give up her search for the missing dogs, and her loyal Facebook followers of over 11,500 people are backing her all the way.

Stacey Firth, one of Georgie’s many supporters, came up with the original idea to spread the word wider by putting stickers, highlighting that Ruby and Beetle are still missing, on Christmas Cards. The idea gained great momentum and now 105,000 stickers so far are with members ready to be sent out for Christmas.

“We know the girls are out there somewhere”, said Georgie.
One of the dogs, Beetle, had her microchip scanned or keyed into a database twice in quick succession. Unfortunately, the database company doesn’t store the data of where the search originated. This has left the family wondering who did this, and why?
The family plea: “If you know anything at all, there will be no repercussions, we are not interested in prosecution, we just want our two beautiful dogs returned safely so that our family can be complete again in time for Christmas”

Georgie and Edward Bell have three children, Tom, Felicity and Frankie who are all devastated at the theft of their much loved family pets. For more information or to get yourself some stickers, you can go to their Facebook page (MISSING – RUBY & BEETLE) – set up to aid the search. Alternatively please phone 07989 513946.